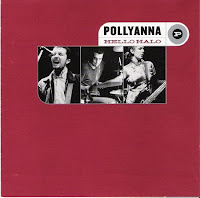 It's hard to believe that Pollyanna's entire back catalog is languishing hopelessly out of print, even in their native Australia, where they were one of the predominant indie success stories of the '90s. It's even harder to be a Pollyanna fan Stateside, let alone Down Under. Once I discovered Pollyanna's third-times-the-charm stunner, Hello Halo in an 88 cent CD bin (thank you Sounds, in NYC), by hook or by crook I managed to obtain their entire discography over the course of four or five slightly arduous years. Amongst their five albums and twice as many eps, I still haven't found anything that equals the passion and melodic prowess of this disk.


Pollyanna's twenty-something angst struck more bittersweet and joyous chords in yours truly with this one album than most bands are capable of when their entire repertoire is considered. Were Hello Halo to have a 2008 copyright date, certain circles would brand this as "emo," given it's often melancholy tendencies. Indeed, this record is emotive, but in the most uncontrived way possible. To describe this album's most affecting offerings like "Cinnamon Lip," "Hilltop Green," and "Effervescence" with such mundane but tempting tags as "distorto-power pop," or "the ambivalent man's indie rock," would be a grave disservice - and yet that's the best I can come up with. Call it what you will, but Pollyanna's Hello Halo  is in a veritable class of it's own.
01. Peachy Keen
02. Frosted Over
03. Hilltop Green
04. Cooling Your Heels
05. Effervescence
06. A Beginner's Guide to Under Achievement
07. Brittle Than Broken
08. Butterman
09. Forgetting How to Feel
10. Cinnamon Lip
11. Pulling Teeth
12. Velocette
13. Rat in the Ranks
14. Tank
Hear
Posted by spavid at 6:26 PM

Thank you.. thank you.. thank you! I've been looking for this for quite a while. They seemed to really nail the perfect mix of heavy and melodic with Hello Halo. I haven't heard anything else by Pollyanna that quite lives up to the grandness of this album. I'm looking forward to giving this a blast in the car tomorrow.

I love revisiting this album. Was lucky enough to see them a couple of times.

I was talking to a friend while going through the archive, just now.

my friend: Pollyanna?
me: What I started to say was that now I just have to find some Australian nineties nostalgia blog,

And right then, I finally found Hello Halo in some format other than cassette. Thank you. Wow.

i remember the song 'effervesance' from years ago (saw it on 'RAGE'). i am a bit of a rare song fan. i try and find my favourite songs by any means, thank you for supplying yet another one for me. i appreciate it.
others i have tracked down:
dark
dark age - hippos
promised land - elvis
sweet touch of love - alex toussant
surfin - beachboys
thanks again

Hi there... fantatsic blog. Was doing a search on Pollyanna (a sorely missed Alt. band from home) and stumbled here.

Is it possible that you are able to post their first album and EPs here (Long Player and Junior/FordGreenSilverRocket/Junior Rock)? I had copies of them but, typically, someone stole them from me and I miss hearing the smooth vocals and melodies of Mat Handley and crew... especially living abroad.

If this can be possible, I would be highly appreciative... been yearniong to hear these songs again for years (their B-sides on the singles were also awesome...)

Cheers and beers... keep up the great work...

I was lucky enough to randomly stumble across Junior and Didn't Feel a Thing second hand in a record store. Still need Hello Halo and Longplayer!

Totally agree, its shameful that Pollyanna generally and Hello Halo specifically dropped off the map.

Brittle then broken is one of my fav songs of all time, so a huge thank you from downunder for keeping our 90's indie bands out there!!

OMG! Thank you....it's now 2011 and this album is impossible to find. Amazon, Fishpond, even Mushroom records Australia are not distributing it anymore. It's a shame, sounds like this have become cool again. Was my teenage angst album in the late 90s, early 00s

Wow, awesome blog and thanks so much for these obscure links!!

Thank you so much! I couldn't find this anywhere..

I've been driving around in the sun all day today while working, listening to Pollyanna on the stereo. Man, I'd love to be able to go to a gig tonight. I tried to remember the last time I saw them live, but can't. They were a great band.

Anyone looking for there stuff should try looking on GEMM.com.

Was in a Pollyanna mood tonight and, after listening to a few "Hello Halo" classics, came across this blog. Thanks. Just what I needed.

I saw the band many times back in the 90s. Even met them backstage and shared a beer after one show they did.

I have all their stuff, minus one of their early eps i couldn't find back then.

thanks for these uploads :)

Any chance of reupping this one? Link has expired. Thanks.

How did I miss these guys? Didn't DeSoto put out a single...can't remember. Reup please.