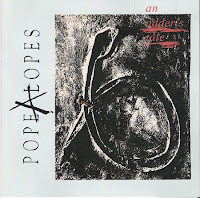 The Popealopes were psych-tinged rockers from Davis, CA that deserved their rightful spot on the Children of Nuggets box set, despite their inconsistency on album. On their debut, An Adder's Tale, the 'lopes sport covers of the Stones "2000 Light Years From Home and John Lee Hooker's "Crawling Kingsnake," but the album's centerpiece is their own "Poor Tom," a lazy Dream Syndicate-esque zinger. The CD version of the album, tacks on a bonus track, "Bovine Lament," which was the b-side to the "Poor Tom" single. 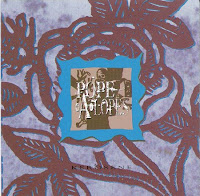 Kerosene helps put the Popealopes on a more straightforward rock trajectory, but as with the debut, a sizable chunk of the album isn't particularly memorable, but strangely fascinating in it's own special way. Were some of the halfway-there melodies fully realized here (perhaps with the title cut being the exception), Kerosene could have been downright dazzling.


You can see what Trouser Press has to say about the Popealopes here. BTW, both of these albums are damn near-impossible to find on CD, as well as their subsequent releases.

Thanks for the reviews! Where on earth did you get "An Adder's Tale" on cd?! I know John Nelson had a few custom made but I never knew they were distributed anywhere outside the band but hey, I am glad they were. "Kerosene" and "Cavalcade" can be found on ebay every so often but good luck with "Slowest Eye" and "Chrome Canary". The later was burned to order at MP3.COM and the former was released in Italy with only a few making it to the states and eventually distributed by Lather Records and the band.

If anyone is interested in any PopeAlopes music, you can find us at myspace dotcom slash popealopes and send us a message. Thanks!

Thanks for checking in. I actually ordered "An Adder's Tale" from Lather Records a couple months ago. Had to do some hunting around, but I eventually found it. He said it was the last copy in stock, so I really lucked out. I may have included a link to your Myspace page in the post. I also own "Cavalcade." If you know of anyone that needs a copy, I believe I have two of them - one of which was found at a thrift store last month in Buffalo!

Again, glad to hear from you Chad. Fight the good fight.

I think they are still going in some capacity. UC of Davis, I remember their first gig with a different singer,player, drummer (I think Pete and Steve are the only original members) at some college party, they did a cover of the romantics "that what you always say". didn't prepare me for what they ended up being. I especially think "Kerosene" kicks major butt.

Pete's been in a couple of other bands as well (Spavid, are they included here?)

Have great memories of house parties and also playing with them in sac/davis.

Wonder what happened to Mr. Sleaze and Mitch..

The Popealopes are one of the best bands that never had success. I always loved their music which I first discovered in 1999 on mp3.com. Its too bad that they didn't meet with more acceptance of their music which was very good in my opinion.

Half the Popealopes stuff is up now at Last.fm:

with the rest on the way. And you can find Slowest Eye on Amazon/iTunes/etc. now or soon. The other albums to follow . . .

Thanks for posting comments hotair and Romero. Have yet to check out some of the Popealopes later albums, but it looks like I'll have a chance to do so now.

More copies of An Adder's Tale and copies of the 3 CD Set "Yolo County Line - The Good, The Bad, The Ugly" of unreleased tracks and singles. Email at: popealopes@gmail.com