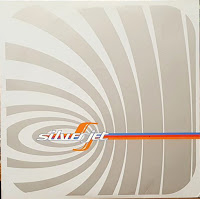 Silver Jet's only crime was signing to a major label (Virgin) too early in their career before having a chance to garner a reputation, and even more egregiously, credibility.  Funny thing was if you were one of the lucky few that got a hold of their lone album, 1997's Pull Me Up, Drag Me Down, this threesome proved they had the latter in spades.  Too high-strung to be adopted by the power-pop revivalist crowd, and not dangerous enough even for the low hanging "punk" minions, Silver Jet's album simply came and went.  The four song Plastiqa is a concise and convincing appetizer for Pull Me Up, hinging on two album cuts, plus a demo of another LP track ("Kid") and a cover of David Bowie's Ziggy Stardust era "Star."  If Redd Kross' Show World (also released in '96) and the first TSAR LP shook your world in the least, you'd be hard pressed not to enjoy these guys.

Excellent choice. Fantastic band! I grabbed their sole album from the cutout bin at Wherehouse Music years ago and fell in love with the songwriting and ultra tight performances. Main man, Luke Tierney, is such a solid songwriter. His work can be found in all sorts of bands and albums. If you dig Silver Jet, do yourself a favor and check out the bands he went on tp form afterwards. His style and approach have really not changed, so you know exactly what you're getting.

The Penfifteen Club (known mostly for the Miss Hilton theme from Simple Life.

Snowjob (Super obscure project that never quite got off the ground but there are a few random demos floating around; "White Girl" and "Miracle")

I also recommend seeking the following non-album tracks Luke has recorded with the aforementioned bands.

"Drive My Car" - Shared Vision The Songs Of The Beatles

"Getting Through To You" - LA's New Alternative

"No Monsters" - The Big Noisy

Damn, thanks for all that in info JKR! I have the Playing Favorites album, but wasn't really aware of Luke's involvement. Looks like there's tons to look into here. Much appreciated.