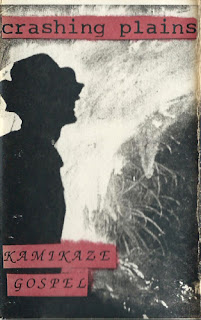 Even in the big bad old '80s when the DIY cassette album peaked (almost to be outdone by similar ubiquity in the early/mid '90s), it was rare to find ones of consistency by genuinely talented artists.  Ventura, CA's Crashing Plains are one of the relatively few bands I've featured that by and large managed to nail it on their 1988 cartridge, Kamikaze Gospel.  It helps to have memorable songs I suppose, and this now rarely mentioned and long departed indie rock trio boasted some really killer ones, in roughly the same vein of Twin/Tone-era Soul Asylum.  "I Dream of Structures," "History Starts Now," and the blistering "Reoccurring Dream," all pack a solid dollop of bite, verve and serrated guitar lines.  The Plains cool their heels on "Bury the Past," while "Holy War," is highlighted by a poignant, extended a cappella intro, before busting out into something more savage.  Kamikaze... infrequently lags here and there, but overall is a well above average keeper.

Frontman Mike Schulte has assembled a lengthy YouTube playlist, predominantly of songs he's performed, including a handful of C/P tunes including this early rehearsal recording.

Thanks for posting, good record. Would it be possible to include ID3 tags in the future so I don't have to retag the MP3s? Thanks!