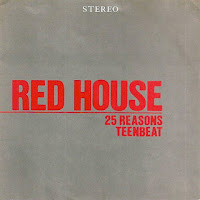 Here I am sharing a single I don't actually own (but really have no excuse not to).  This isn't the Red House from New Jersey whose album I shared eons ago, rather this was an even less renown band bearing the same moniker.  The Red House in question were actually Minneapolis denizens, and frontman Mark Freeman came from a late '70s post-punk outfit, NNB, who also released but one single before closing shop.  Both tracks here border on excellent, with "25 Reasons" representing itself as a comparatively insular but forward-thinking pop-rock number.  The darker "Teenbeat" is antithetical to it's title with minor chord shadings and a subtle but well-placed piano line situated around the chorus.  A big thanks to whomever ripped the files for this one.

Can't thank you enough for this one. Had the physical single back when it came out and it has gone astray. "25 Reasons" has been a kind of holy grail for me. Thank you.

this is off topic but how do i put my band's bio up on this site ?! franklinehan73@gmail.com