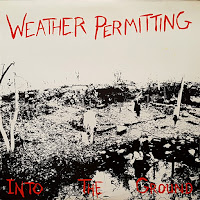 I suppose there isn't one individual dot on the map Weather Permitting strike me as sounding indigenous to, circa the era of this record.  England for sure - in a heartbeat in fact.  Maybe down under in Christchurch, NZ or more broadly Australia.  Heck, toss New Jersey in there too...but Montreal?  Yeah, it surprised the heck out of me to learn WP's actual stomping grounds were in Quebec, because they sure in hell don't resemble any Canadian band I've laid ears on before. Not that they were swilling out anything particularly exotic mind you, but these Anglophiles had a solid grasp of what was going in Britain's indie scene of the day, taking a page from the June Brides, Bodines and Felt.  They have enough jangly inclinations to conjure up a likeness to New Zealand's Bats, and a gift for meaningful strummy song-craft faintly recalling the Triffids.  And if your sensibilities are anything like mine you may even hone in on the tincture of American, left-of-the-dial fixtures the Feelies.

Into the Ground isn't an outright revelation, as there were so many records sharing its aesthetic that made it to the table prior to Weather's arrival, but the band's acumen and quality control are demonstrably impeccable wherever the needle lands.  I could name several favorites here - "Almost
Happy" and the sorta two-for-one "Land/Goldmine," but I'm content to let you pick one of your own.  In 2011 Raised on Canadian Radio blog offered a brief but informative backgrounder on the quartet that you may wish to refer to.

Really enjoying this one. Thanks for sharing!