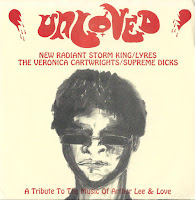 As far as tribute comps go...let's just say this isn't one of the more appealing ones.  Plenty of reasons for that but none too dramatic to torpedo this affair outright.  Arthur Lee & Love are good enough  candidates as any for this type of homage, and in fact the same year this double 7" ep made it's way onto shelves so did an entirely unrelated Love tribute CD, We're All Normal and We Want Our Freedom.  For whatever the reason, Unloved only plucks songs from one of the group's albums, namely their 1966 debut.  Not a bad record at that, but if you're craving any favorites along the lines of "Andmoreagain," "The Good Humor Man..." or even "Seven and Seven Is," you're flat out of luck, Jack.

My next big complaint is the performances. New Radiant Storm King who I normally enjoy could have really pulled off something sweet with "My Little Red Book" if it wasn't for the fact that Peyton Pinkerton decided to phone in his vocals.  Next, Love's "Signed D.C." wasn't exactly exciting to begin with (after all, it was a ballad) and the Lyres live take is respectful but anticlimactic.  The Supreme Dicks are/were true to their name, insisting on employing a ridiculous vocal effect on "Can't Explain," winding up resembling something like Ween.  The Veronica Cartwrights win this rather meager sweepstakes with a linear but heartfelt reading of "A Message to Pretty."  One more thing - Discogs' page for this record depicts an entirely different (and more attractive) sleeve than the one above.  Dare I say there were multiple pressings of Unloved?  But anyway...