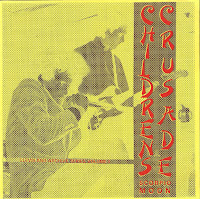 Children's Crusade were your classic definition of a footnote band for more reasons than one.  The lineup entailed future overachiever Doug Gillard who would later hone his talents in a plethora of higher profile combos with national audiences including Death of Samantha, Cobra Verde, Gem, and predominantly in the twenty-first century by way of Guided By Voices and Nada Surf - not to mention as a bonafide solo act in his own right.  C/C's footnote status is further cemented by the fact that their discography (prior to this archival 45) consisted merely of a cassette, where these three songs were derived from.  It's a gentleman named Fraser Sims (who served a mid-80s stint in Cleveland hardcore kingpins Starvation Army) on the mic, with the credits indicating Gillard was responsible for all other aspects of the band's sonic force majeure.  And what a force to reckoned with, usurping their noisome inspiration from some of the more subterranean SST Records stablemates of the day. The six and a half-minute "Blue Venus Aflame" boasts faint art-punk leanings, and were it not for Sims half-spoken vox this might pass for a Meat Puppets outtake.  "Your Time is Through" is this disc's most blatant charmer, a borderline melodic, mid-tempo piece that bore resemblance to the Crusade's fellow Buckeye state contemporaries Great Plains.  The concluding "St. Jack's Bible" is grimy and cranky as all-get-out, making it's aforementioned accompanying flipside sound like a downright anthem by comparison. Plentiful liner notes can be located on the record's inner and back sleeves.

A. Blue Venus Aflame
B1. Your Time is Through
B2. St. Jack's Bible