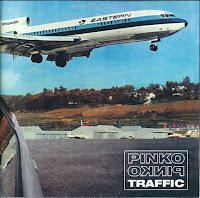 I learned of Pinko Pinko the old fashioned way - a friend lent me their CD.  I already knew going into this one the band was of Swedish stock, but had I not I would have unsafely assumed them British, because right down to the seemingly mimicked accents they sounded every bit the part.  Traffic was their parting shot, and after a few spins it occurred to me that this is what I had really hoped the first couple of Blur albums could have amounted to back in the day.  Blur didn't truly win me over until Parklife, and even on subsequent albums they didn't do a whole lot for me, but Pinko points to where those guys might have gone if they had modified their aesthetic a tad and went for something more ironic.  Another one of Pinko's Britpop contemporaries, Salad, come to mind on more than a few occasions here, albeit no one in P/P is female.  Traffic isn't swimming in obliqueness, though it's hard to ignore its creators wry and not-so-obvious maneuvers. Again, this band sound nothing like their Swedish brethren and are Anglophiles to the ever lovin' core.  Check this out and draw your own conclusions.  In addition I've tacked on a couple of era b-sides.

Nice to see this one here. Back in the day(when this came out), Not Lame imported much of the SOAP RECORDS catalog for its mail order(including this one) because...well, because let's face it, the Swedes did power pop and its related ilk damn mighty fine back then! I've not heard this one in well over 20 years...thanks!

Hello, Could you please re-uploaded it??? Seems like the link is dead,,
Thank you!!! Also if you havr the other album by them, would be appreciated if you want to share it too :)