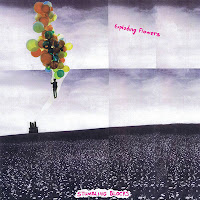 What possesses the benignly mercurial affectations of the Rain Parade, the mid-fidelity penchant of early Guided by Voices, and is chockablock with comely, chiming arpeggios and empathetic vocal aplomb?   Why it’s none other than Stumbling Blocks, the new LP by L.A.’s Exploding Flowers.  Applying just any one of the aforementioned characteristics would likely emanate a certain magic unto itself, but with all elements functioning in tandem the Flowers imbue “Among Burn Out Stars,” “Far, But Never Gone,” and the especially striking title cut with an even more mesmerizing alchemy altogether.  Contrary to the album moniker, no stumbling blocks here, just a dozen winsome stepping stones with myriad charms and a keen forward-thinking temperament that’s retrofitted in all the right places.  Stumbling Blocks is available from the band's Bandcamp page or The Beautiful Music. 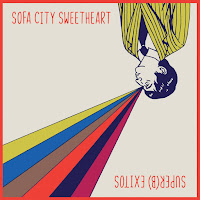 It's been awhile since I checked in with San Diego's Sofa City Sweetheart, just over a decade in fact, when their self titled 2008 effort made it's way into my CD player (remember those?).  Not many more sofa albums have filled the gap between that one and 2019's Super(b) Exitos, which surprisingly finds focal point Juan Lopez bartering in the same thoughtful, warm-hued singer/songwriter pop that's equal parts invigorating and empathetic. Tunes including (but not limited to) "Stanley Waited" and "Stop the Thinking" exude the competent, harmony-ridden craftsmanship of Sloan and Mike Viola, while simultaneously bearing the emotional heft that the late Elliott Smith made his calling card.  There are lilting ballads along the way as well, featuring ornate and refined flourishes of piano, strings and even an abundance of cooing oohs and ahs.  Much to revel in here, as well as SCS's Bandcamp site, which not only offers Super(b) for a modest amount of shekels, but other goodies like an even more recent collection of Elliott Smith covers. 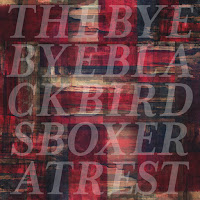 Seemingly exploding into the spotlight just this year (but actually boasting a good decade or so under their belts) Bye Bye Blackbirds featuring frontman Bradley Skaught are one of the hottest commodities in modern day power-pop.  No, I ain't talking about the three-chords-in-three-minutes-and-we're-outta-here variety of said genre, rather the more immaculately prepared and considered variation thereof, entailing rich, deftly honed musicianship and an uncanny melodic finesse.  Wedding the aesthetic of bygone, under-the-radar pop classicists the Grip Weeds and The Rooks to Roger McGuinn-esque guitar fills, not to mention a twenty-first century aptitude, The Blackbirds have seized on a polished but breathable formula that practically screams "class." Produced by Doug Gillard, with engineering assistance from another vaunted pop demigod, Chris Von Sneidern, Boxer at Rest is a bouquet of sophistication, harmonies and appropriate nods to the past, yielding such should-be hits, signature songs, etc as "So True" and "All Our Friends."  Skaught and Co. even have the wherewithal to break out a horn section on occasion.  Boxer at Rest can be had via Amazon, and physical versions are for sale over at BBB's Bandcamp corner of the web. 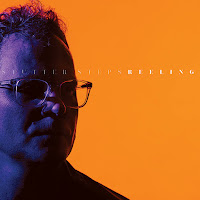 Once or twice a year an unsolicited gem makes it's way into my mailbox.  Here's one of 2020's most impressive entries into that not-so-expansive rectangular receptacle.  Bathed in analogue hues with an ever-so-slight undercurrent of keyboards supplementing the usual guitars and drums, the real key to Stutter Steps' charm doesn't merely reside in their sonic facets, rather Ben Harrison's mildly melancholic and casual parlance.  Bearing a resemblance to East River Pipe, Outrageous Cherry, Galaxie 500 (Stutter Steps collaborated with Dean Wareham previously) and to a less obvious extent the Velvets, the Steps are going for depth on Reeling without outright sinking.  What Harrison extols about isn't always identifiable to the listener, but his ruminations never overreach into any sort of histrionics or gratuitous drama.  My only quibble with this otherwise excellent disk is it's general sameyness from song to song.  Then again it's hard to argue that I'd want them to upset the apple cart when their results are so uniformly effective.  Reeling is available now from Blue Arrow Records and, you guessed it, Bandcamp.

Was able to listen to Stumbling Block about a month ago and being a jangle-head was impressed. Of the lot, "Mirror to Mirror .." has been part of the most played list since.

The handful of people I know familiar with Stumbling Block have nothing but flattering things to say about it.