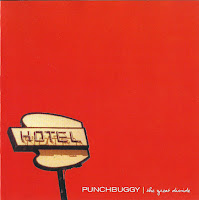 Got a request for this one recently.  The Great Divide was the fourth in a series of Punchbuggy albums to feature less songs than the LP that preceded it.  I suppose they called it quits after this one considering the only logical move for a fifth record would entail offering merely ten songs (or less). That would hardly be a complaint though given the caliber and consistency of what they pumped out for almost ten solid years.  These Ottawa-based Doughboys proteges knew their way around a hook, not to mention chunky punk-pop riffs, all the while sustaining maximum sonic density.  I've gone back and forth on my favorite Punchbuggy albums over the years, but since they're not a band that anyone normally "debates," so guess what?  I don't have to pick favorites. Even with the absence of Jim Bryson on guitar (who also wasn't aboard from 1998's My Norwegian Cousin) The Great Divide is another wall-to-wall trove of aces, wherein the band even negotiates some modestly mature gestures on the slower (but not quite ballad-worthy) "Easy to Leave" and the relatively contemplative title cut.  Aficionados of the Doughboys Crush or Goo's Superstar Carwash will find plenty to love here.  In fact, the only thing that might have improved ...Divide is if the band employed another halter-topped model for the album cover, as they so effectively did with the aforementioned My Norwegian Cousin...but once again I digress.  You can also find the band's second LP, Grand Opening Going Out of Business Sale here.

Thanks for this! Any chance you could upload All Nite Christian Rollerskate? It's one of my favourite 90s albums and is only available on Youtube :/