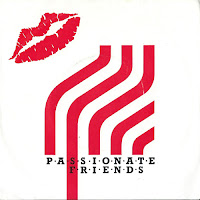 Passionate Friends, who despite their namesake did not follow in the same creative footsteps of the Teardrop Explodes, were a Scottish six-piece who made minor waves with a pair of singles in the early/mid-80s.  Consisting of no less than three brothers John, Malky and Allan McNeill, the Friend's debut 1982 single, Time Bandits/What's the Odds was an impeccable stab at new romantic pop firmly in league with A Flock of Seagulls, but somehow more resonant.  The band caught the interest of MCA a year later, who released the 7" platter I'm presenting today.  Bearing a mildly more linear tact with the guitars taking on even footing with the synths, the band's self-titled tune (imagine that, beating Living in a Box to the record presses by a good three years or so) exudes melodic and casually melancholic hues, to gratifying effect.  The flip, "Wake Up/Shake Up" charts more of an uptempo course, but not as memorable (patented '80s sax wails don't do them any favors).  However, I've decided to do you a favor by tacking on the winsome "What's the Odds" from their previous 45.  The Wiki2 link provided above will steer you to all of the biographical deets you could want on the Passionate Friends, including info regarding their 2008 reunion.  Cheers.

A. Passionate Friends
B. Wake Up/Shake Up
plus: What's the Odds