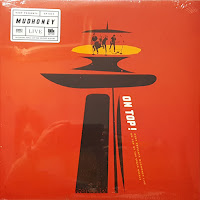 Another Record Store Day has come and gone...but actually not exactly this year due to an obvious and wisely chosen postponement of due to the Covid-19 virus that's tragically very much still with us.  In fact, to keep crowds at bay to avoid anything approaching a super-spreader event, this year the breakdown of the 500 or so releases was spread across three dates, August 29th being the first.  While I'm not quite at liberty to share anything that just came out, I've made an an inconsistent tradition of sharing titles from previous RSD sales. This year, the honor goes to a 2014 release from Seattle's quintessential Mudhoney.  It's a live set captured by KEXP radio of a July 11, 2013 gig the band performed at the top of the Emerald City's defining landmark, the Space Needle.  Presumably Mark Arm and Co. were situated in the observation deck, where the audience were treated not merely to a breathtaking 360 degree view, but a visceral half-hour of power with the legendary quartet busting out ten, tight, serrated grunge-punk blasts, revisiting know-em-by-heart classics "Touch Me I'm Sick," "Suck You Dry," and "Into the Drink."  Alongside the standards were nearly as many new songs from that years Vanishing Point, a late career record that I wasn't completely sold on, but hearing live incarnations of "The Final Course" and The Blue Cheer-flavored "I Don't Remember You" enlightened me with a greater appreciation of the path Mudhoney had placed themselves on in the twenty-first century.  Enjoy.

Never ever have I seen this. Wow! Thanks lots.

I listen to KEXP a great deal and saw this performance (they had a video feed as well). It felt like a gimmick until the music started and then it felt visceral, electric and a bit dangerous.