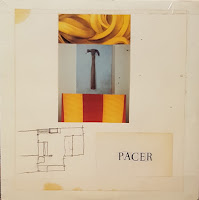 Pacer were a coed trio of New York indie kids with a penchant for noise and serrated guitar histrionics, but on their lone ep they reign in just enough of the chaos to filter in a few morsels of the latent tuneful ambition they could have likely made so much more of on subsequent records had they stuck it out.  They were label-mates with Versus, who were newly incorporated themselves at the time, and the two bands had just enough in common to draw a legit comparison.  Truthfully, Pacer made more of a racket and played it a good bit looser.  You might sense trace elements of the first Seam album (Headsparks), and Unwound, but I think the latter was more of a coincidence.  Of the three Pacer aluni, it's bassist Samara Lubelski that went onto to the most robust career with stints in the Sonora Pine, Chelsea Light Moving and has abundant solo releases to her credit. My apologies if the audio is a little bumpy in spots.  Purchased this one used and the condition wasn't as sharp as I preferred.