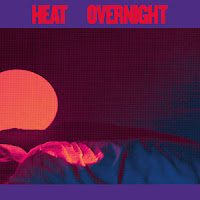 2015 may not have been a banner year for music, but it was a definite improvement over the three or four that preceded it.  This was due in part to the increasing visibility of emerging, guitarsy indie-rawk combos like Cheatahs, Beach Slang, Viet Cong (now renamed Preoccupations), Nai Harvest...and Montreal up-and-comers Heat.  I talked up their Rooms ep two years ago, and remarked how that record didn't quite do them justice stacked up to their live gigs, one of which I was fortunate to witness in '15.  Even at the time of that show there was talk about a follow-up to Rooms, and the freshly minted Overnight is the successor in question.

My hopes for Overnight were in a word, lofty - if for no other reason than Heat's juiced-up delivery on stage.  The quartet deliver on the songs, considerably in fact, it's the conveyance of them that has me a tad hesitant about committing myself to the sleepover the record's title suggests.  Susil Sharma's timbre is a variance of that of the Psych Fur's Richard Butler - one could do far worse, but my contention lies more with his monotonous and frequently droney drawl.  Sharma's air of cool, as it were, wears quickly, and I wouldn't advise holding your breath waiting for a dynamic to kick in.  This proclivity aside, Heat ultimately succeed with a competent and compelling album that virtually never falters.  Overnight doles out one bristling tune after, often reaffirming my faith in contemporary rock music.  "The Unknown," "Sometimes," and "Chains," (the latter of these originally revealed in demo form a few years ago) move the needle for me.  Indeed, there's some catchy shit here, but don't limit yourself to the record, see these blokes in the flesh if at all possible.  As this goes to press they're touring Canada, and playing SXSW next month.  Pick up Overnight on Amazon, Bandcamp and iTunes, or straight from the source at Topshelf Records.
Posted by spavid at 6:28 PM

This is so good. Are you sure it isn't actually from 1992? You probably are.