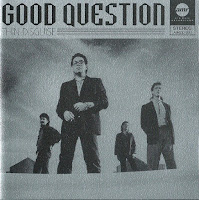 Here's a rather substantial upgrade to a record I posted almost seven years ago.  Fronted by proto power-pop maven Van Drunen, who was lauded for his now classic 1977 LP Are You Serious?, Good Question lasted but one record, Thin Disguise.  Drunen formally inhabited the same stomping ground as Big Star and Chris Bell in the heady, early '70s Memphis pop scene, though you'd barely know it from the sound of this record, which was largely steeped in a Todd Rundgren and Utopia aesthetic - not to mention a healthy dollop of 1980s production finesse.  This is the CD incarnation of Disguise, re-released in Japan in 2001 with five bonus morsels, including a 1987 recording session.

A denizen of the '70s Memphis music scene, who was not only in cahoots with Big Star's Chris Bell and Jody Stephens, Van Duren went so far as to audition as a guitarist for Big Star, but ultimately that wasn't in the cards.  By the mid-80s, Van Duren's McCartney-cum-Emitt Rhodes aplomb had taken a back seat, and his new vehicle of choice was Good Question.  Thin Disguise boasts the plush, airwaves-groomed sound of it's era, gunning just shy of Casey Kasem’s weekly honor roll, while managing to keep much of it's fragile credibility on the same page as it's rather obvious commercial aspirations.  There's some faint new-romantic gestures cropping up on "Girls In Uniform" and "The Couple Most Unlikely," but Thin Disguise is at heart a hook-savvy, but meticulously polished '80s pop/rock record that didn't have the corporate backing to accord it with the en masse push that would have made all the effort worth it.

I'm no longer hosting this.  Please purchase through Bandcamp.
Posted by spavid at 8:34 PM

Thank You! This is awesome.

Found this via some big power pop list somewhere. The song "Jane" is brilliant. Had no idea Van Duren was behind it. But it makes tons of sense.

Could you re-up this release, please? Thank you.

I'll second that request. Would love to hear this. Thanks.