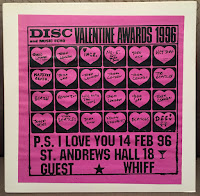 Here's an approporiate album title for Valentine's Day if there ever was one.  Sadly, word went out two weeks ago that Majesty Crush frontman David Stroughter passed away, without much of a causation of death provided.  Never knew him personally, but I was gonzo for Majesty's one and only full length, '93s Love 15, a nuanced Yankee response to heady, Brit shoegazer/dream pop.  I've been sharing two independently released M/C eps, Fan and Sans Muscles for virtually the entirety of this blog's lifespan, but news of David's passing had me scurrying to Discogs to see if there had been anything I missed within the realm of his bygone band.  As it turns out there was a missing piece of the puzzle after all, the record I'm sharing today.

P.S. I Love You, was released in 1996 in a startlingly low quantity of 200 vinyl copies, predominantly distributed in Majesty's stomping grounds of Detroit, MI.  Someone had recently uploaded some vintage M/C clips on YouTube, and in the comments for one of them I put the call out for a digital version of this exceedingly scarce and long sold-out piece of wax.  Within a matter of days someone came through, with a nice clean rip of the album, all seven songs, that were exclusive to the disk at the time of it's release.  Love 15 had major label backing, but by 1995 the band retreated to their own Vulva Records.  Sonically, P.S... is considerably rawer, albeit not as clingy to the ethereal ethos of Love 15.  Oddly enough, the opening "Unless I See You Again" opens with the stanza "the sun's going down on my life," a line that would become soberingly prophetic in a couple of decades.  Writ large, the record isn't a downer, just deliciously bittersweet with noisome, effects-laden guitars that will ring delightfully in the ears of any distorto-pop aficionado.

Stroughter eventually relocated to Los Angeles, and minted a new indie pop posse, P.S. I Love You, obviously named after Majesty's elusive parting shot.  A heartfelt remembrance of Stroughter can be found here.  Special thanks to whomever took the time to digitize this record, and Discogs.com for the images.

Nice work and thanks for posting this so quick. Just to add some info, I watched part of an interview with David on Youtube and he mentions the name comes from the Beatles song.

Thanks again for Majesty Crush.

Thanks. Yes, I've got to check out that interview on YouTube soon.

Thanks for turning me on to Majesty Crush. Terrible to hear about David's death, and terrible that I never heard their music until now. And 1993 is my all-time favorite year for releases so it surprises me this flew under my radar (I turned 20 that year and had to have my hands on just about anything shoegazey-ish). I need to hunt down a copy of Love 15 now.

Do you minda consider to reupload this ep?it would be great..thank you

Thanks for posting this. The PS I Love You stuff is great too.