The premise of this one is pretty much identical to my singles spree from last night.  Three really exceptional short-form records that I deemed worthy of special representation.  I'm pretty certain all of these acts are making their Wilfully Obscure debut this evening. 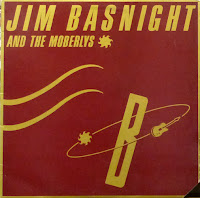 Straight up, crankin' power pop from a Seattle fellow who's staked his very name on it.  Jim Basnight and Co. pull from inspirations ranging from the Beatles to contemporaries The Nerves and Plimsouls, with this self titled ep boasting four capable and highly potent numbers.  Jim's tact is fairly linear, yet immediately gratifying whether applying to the racing "Cinderella" or the Raspberries-inflected "I Want to Be Yours."  The man in question still performs frequently in the Pacific Northwest (soon to be the breakaway public of Cascadia, don'tcha know?). You can track his exploits here. 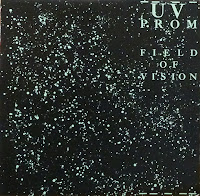 Info is scant to non-existent on this North Carolina, Comboland-era outfit whose entire discography may have began and ended with this record.  But a damn good record it is, which unsurprisingly was produced and engineered by that noted Tar Heel tag team, Don Dixon and Mitch Easter.  There are subtle post-punk inclinations infiltrating UV Prom's dense and occasionally moody pastiche, reminiscent of west coast counterparts Red Rockers and Wire Train.  In fact, this foursome would have slotted in nicely on the 415 Records roster.  A solid undercurrent of melody makes Field of Vision a must listen. 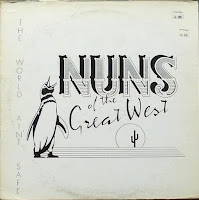 Finding this in the used bin at the always rewarding In Your Ear Records in Boston last year was a massive treat.  Nuns of the Great West were a Fredonia, NY based enterprise, which means they likely hobnobbed with homeboys (and girl) done good, 10,000 Maniacs.  Their sonic aptitude was sprite and clangy bearing oodles of that '80s college rock flair, but outside of western New York I have a hunch they were more left-off-the dial than left of it.  Sad thing that, as The World Ain't Safe illustrated the Nuns were off to a pretty vibrant start.  I'm also tacking on six bonus songs, originally made available on Nuns bassist and keyboard slinger Doug Arnold's Reverbnation site.  Enjoy.

Bonus Nun's spiel (incl as a folder of MP3s in the download): Back to you, Fuse, How Do you Sleep, The World Ain't Safe, What's it Like, You Never Believe Me.

Sounds like your turntable has a loose belt... speed seems to vary during playback.

That's what I've been hearing Dougal - and I've only had the player for thirteen months - just outside the warranty. Been spending the last month trying to confirm if there's an issue or not. Thanks for your imput.

Nuns Of The Great West were good friends back in my Fredonia era. Sadly, Doug passed away a few years ago. He was a great guy and is sorely missed. Thanks for posting it

re-up when u have time please