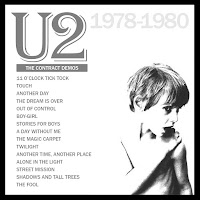 Until I have the opportunity to digitize more analog curios, I've decided to share this.  Probably a good 25% of you are already familiar with these recordings, be it from decades old tape trades or a host of other blogs that have undoubtedly made this available long before I have.

The whole U2 love 'em or hate 'em argument never held much water for me, as I'd argue there's plenty of middle ground to be had.  Sure, there were some utterly polarizing miscalculations like Zooropa and Pop, but to dismiss everything Bono, The Edge, et al were responsible for out of hand seems a stretch.  As for not-so-early adopters like myself (who came aboard circa Unforgettable Fire) I belatedly encountered the first three albums (Boy, October, War) but was enamored with them as much as anyone could have.  By accident, dumb luck or perhaps intention, U2 arose from seemingly indigenous sonic environs, often imitated, but never duplicated.  So frequently I've heard the "early U2" comparison leveled in music reviews and bios of other emerging outfits, and just as often my expectations are deflated upon hearing the finished product.  In a nutshell, what is it exactly with U2's initial volley or albums and singles (like the fantastic one-off 45, "A Celebration")?

Culled from five recording sessions between 1978-80, this popular bootleg offers prototypes of several tunes that would be revamped for 1980's seminal post-punk foray, Boy, not to mention a handful of songs that would never crossover to vinyl/CD.  The mach-one phase of U2 tenure wasn't the group's pinnacle, but as evidenced by this collection, these Dublin homies were off to an auspicious start.

It is amazing and wonderful to visit your site. Thank a ton for such a nice post.

The early-U2 was just magic. It really had no antecedent. And to think they were about 20 years old when Boy was released is kind of shocking. My first exposure to U2 was seeing the "Gloria" video on earliest MTV c. 1982. I was immediately blown away. Like a lot of folks, I lost interest in them over time, but those first few LPs/EPs... just wow. Almost everything Steve Lillywhite touched between 1980 and 1984 was gold.

Hello, can I get a re-up to this?
Many thanks
Denis