Well, this may not be as enticing as say, an eight disc Big Star box set (last year's premiere Chanukah upload) but for aficionados of Dunedin, New Zealand's most prominent purveyors of indie pop, the triple CD Secret Box will be sacrosanct nonetheless.  Behold, a warts and all smorgasbord of just about ever conceivable Chills song that never made it to the proper albums or the Kaleidoscope World compilation.  Limited to a mere 500 copies, the Secret Box was geared to the most die hard of fans, but it's hard to believe that after their initial volley of singles and 1987's Brave Words LP that virtually anyone who encountered those sacred sides of vinyl could be anything but a hardcore acolyte. 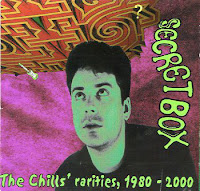 For the uninitiated, The Chills were arguably the flagship band for Flying Nun Records.  Anchored in Christchurch, New Zealand Flying Nun probably didn't launch with the intention of setting the world afire but despite it's relatively desolate locate the label fostered forward-thinking artists and gradually built their "brand" as a consistent and rewarding trademark of quality and creativity.  Kiwi cult legends including the The Clean, Bats, Straitjacket Fits and even more notably the Chills, put their label on the map.  In the eighties and early '90s it wouldn't be an exaggeration to say that many a Flying Nun band set a higher bar for indie music in both hemispheres.

The Chills incorporated in 1980, but the world at large didn't catch wind of them until they got around to releasing classic singles like "Pink Frost," and their internationally disseminated debut full length Brave Words.  Frontman Martin Phillips has commandeered an array of Chills lineups on and off since, yet most of these configurations have demonstrated a firm semblance of chemistry and consistency.  Coincidentally or not, they wielded a similar sonic aesthetic to such anglophile contemporaries as the Teardrop Explodes and Echo and the Bunnymen.  Perhaps also coincidentally, the Chills traversed the same wavelength as C86-era Brit-pop combos like Close Lobsters and the Bodines.  Fine company to be part and parcel of, yet the Chills possessed a competent agility of their own design, which by the way made local New Zealanders like Split Enz look frivolous by comparison.

Phillips and his cohorts doled out no shortage of jangly chords, but fleshed their modus operandi with organs to boot, another telltale Chills earmark.  Speaking to some of the tunes occupying their first three full lengths (Brave Words, Submarine Bells and Soft Bomb) the band's compositions ranged from incendiary surges like "Oncoming Day" to buoyant, melodic confections including (but hardly limited to) "Heavenly Pop Hit."  For better or worse these songs aren't represented on Secret Box, at least not in their original iterations.  In fact, several great songs are MIA, but the thing to bear in mind is that this collection was designed for collectors who had long mined their commercial releases.  Nor is this an ideal jumping off point for neophytes.  If you're looking for an intro to the Chills, I would suggest going for the recently reissued Kaleidoscope World or even an equally representative compilation of archived BBC recordings.  Otherwise if you're looking to excavate, you'll find a brief synopsis of each disc in Secert Box below.  Also, make sure to note a painful omission I made from the second disc.  Special thanks to EVR who was instrumental in furnishing us with photos of the art/sleeve notes, all included in the folder of disc one.

Disc One: Sonic Bygones
23 live selections that never quite transitioned to the studio, much less anywhere else but the stage, all tracked between 1980-85, save for a Coca-Cola jingle that closes things out.  In actuality, a few songs were retitled and retooled and were eventually cut for Chills records.  An interesting look into the band's rather raw, embryonic beginnings

Disc Two: Salvaged Bullion
Please note: tracks 9-20 are omitted, as they have recently been made available on the Chills BBC Sessions album.  Sorry!

More live rarities madness from the same era occupy the first portion of Salvaged Bullion, while the disc concludes with unreleased studio material including demos and outtakes, though I have to say some of which aren't particularly pivotal.  The flexi-disc version of "Oncoming Day," however, is not to be missed.  After cleaving off the BBC tracks, you're still left with a good 17 tunes.

Disc Three: Singular Booty
Singular Booty is a 31-song clearinghouse of sorts, gathering up miscellaneous Chills b-sides, compilation appearances and general studio offal that never found a home on their full lengths.  Perhaps the strongest and most revealing of the three CDs.  Track source info is available in the art/liner notes folder found with disc 1.

Thanks. Love that Dunedin sound

Many thanks -- found out about this just a bit too late when it came out, then found an mp3 version a few years ago, but this FLAC version is a godsend. No worries about the BBC tracks -- bought the CD as soon as it came out. Thanks again!

I'll go out on a limb and say this is every bit as enticing, if not more so, than the umpteenth unearthed Big Star "gem."

Man what a treat. Thank you so much!!!

I had given up looking for these tracks a long time ago... a heartfelt thank you.