So you might be asking yourself, why in the world in an oddly-monikerd and almost thoroughly unknown outfit dubbed Neon Rock Garden occupying one of merely eight coveted Chanukah slots on Wilfully Obscure? 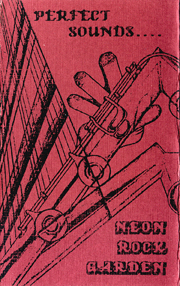 Truth be told, this Hickory, NC trio made their presence felt on these pages in 2012, by way of a fantastic 1986 7" I plundered off Ebay. Both cuts, "Never Listen" and "Don't Say Baboon" were incontrovertibly the best of both whirls, blending the utmost strengths of fellow NC natives Let's Active and early U2.  A match made in noise-pop heaven as far as I was concerned, and when I learned of a cassette album, Perfect Sounds..., that was released in close proximity to the 45, I went on nothing short of a manhunt in obtaining said cartridge...or at the very least a reasonable facsimile thereof.  It took three years and personal contact with virtually all NRg members, but my persistence paid off late last year when original Gardener Mike Cook, hooked me up will all ten MP3s composing Perfect Sounds, as well as scans of the accompanying artwork.  The quest was fulfilled, and now I'm sharing the spoils with you.

As was the case with the "Never Listen" single, the tape was produced/recorded in it's entirety by Mitch Easter at his now fabled Drive-In Studio in Winston-Salem.  For the trio (Gene Preble on gits and vocals, Tina Pinnix guitar, and Craig Delinger presumably manning the drum kit) the collaboration was a thoroughly appropriate one, given NRg's adoption and/or adaptation of the "New South" sound which skewed heavily to Easter's own troupe, Let's Active and period combos like Dreams So Real, Love Tractor, and Matthew Sweet's Buzz of Delight.  The band's hometown of Hickory was nestled due west, halfway between Winston-Salem and Charlotte.  In short, this threesome was in very good company, but t'was not to be for long, for after Perfect Sounds this Neon delight would go dark.

I could go on and on about Gene's dazzling arpeggios, or NRg's urgent but tempered pace, or for that matter the near-anthemic tenor of so many of their tunes, but I'll spare you any further deconstruction.  Quite simply, this band emanated virtually everything I desire in music.  And although this tape was likely to be heard by a few hundred local fans, I like to think NRg approached the Perfect Sounds sessions as if it was a full fledged album, not merely a glorified demo.  Hope you concur.  BTW, an earlier (not to mention a tad more vulgar) NRg tape has been made available for public consumption on YouTube.

Ho-lee-CRAP. You keep finding these amazing Easter-produced treasures, and I love you for it. You could stop your eight days of musical love with this post, and I'd be happy as hell.

Marvelous thing that. May we never run out of unearthed Mitch productions.

Tina Pinnix was the guitarist. Not bass

Thanks for the correction on that unknown!

I have been hunting this for YEARS!!! Thank you!!!

I was friends with the band and went to school with Tina. I remember going once to see them record with Mitch. Shows were amazing! They played all over the southern region.

Hey Thasoulmanshaus. Thanks for commenting and sharing. I've been in touch with some of the NRg alumni, including Tina, Mike and Gene! Mike set me up with files of the Perfect Sounds tape, and I was lucky enough to find original copies of the singles (two of them anyway). Tina and Mike are on FB, haven't talked to either in a long time. Do you know if tapes of any live NRg shows exist? Hope to hear from you again.

Any chance of a re-up? Thanks in advance.

This is Tina Pinnix the guitar player for Neon Rock Garden. I just recently put Neon Rock Garden in Sound Cloud and my Band I started after moving to Raleigh in the early 90's Tomorrow's Party os also on there.. search under my name and there's two play list
. If you like NrGs stuff And apparently you do. I'm POSITIVE you'll like Tomorrow's Party as well. Check out a track called Killing Time in DreamLand

This is Tina Pinnix guitarist for Neon Rock Garden. I thought you Mike like to hear the band I started after NRG.. called Tomorrow's Party. It was in the early 90s in Raleigh NC
You'll love it I think.. all the guitar work in NRG was me. Gene P. Played bass. So you'll recognize the guitar work.
https://soundcloud.com/tina-pinnix/sets/tomorrows-party?ref=clipboard

This is Tina Pinnix guitarist for NRG. Thought you might like to hear the band I started after NRG called Tomorrow's Party. It was early 90s in Raleigh NC. You'll recognized the guitar.

This is Tina Pinnix Guitarist for Neon Rock Garden.. I thought you might enjoy hearing nthe band I started after NRG in the early 90's from Raleigh NC.. you will dig it
https://soundcloud.com/tina-pinnix/sets/tomorrows-party?ref=clipboard

Hey Tina! Just saw your posts. I'm actually FB friends with you (though I won't reveal my name on my blog). Just shoot me an email if you could - trusty73@roadrunner.com I finally got a hold of your old bandmates - in fact Mike set me up with files of the tape

Will check out Tomorrows Party as soon as I can. Cheers.

Thanks. Grew up near hickory and had an nrg single when I was in high school. Really loved it but lost it in one of many moves. Thanks to Tina for posting the links to SoundCloud.