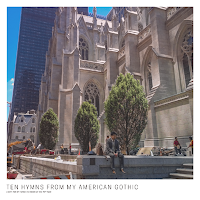 I imagine it would have been nearly impossible for anyone who heard St. Lenox's 2015 debut, Ten Songs About Memory and Hope to walk away feeling anything less than gobsmacked.  Such reactions in the arena of music were scarce in the twentieth century and are far rarer today, yet Midwest to Brooklyn transplant Andy Choi's sophisticated songcraft and trill-ridden timbre informed me and anyone else within earshot that a major new contender had arrived.  Even if he didn't naturally emanate the resonance and vocal hues of Stevie Wonder, Craig Wedren, (and to make a more contemporary comparison CeeLo Green) his debut ...Memory and Hope would still be worth experiencing purely for the sentiments, observations, and subtle philosophical prism Choi's songs uniquely entail.  But yes, a fantastic set of lungs aren't going to get him expelled from the choir anytime soon.

Arriving a year and a half later is another ten song installment, wherein the author and crooner waxes verbosely on lifetime ambitions, politicians and relevant international locales.  Choi must have garnered a great deal of positive feedback on the aforementioned ...Memory and Hope, because it's successor, Ten Hymns From My American Gothic, doesn't tinker (at least not drastically) with his debut's overarching tenor and pace.  The conveyance of these lucid and personal ruminations border on stream of consciousness, but unbeknownst to the listener is the time it actually takes Choi to stitch his seemingly fluid prose together.

There's an obvious theme running through at least pair of songs amidst Ten Hymns..., regarding Choi's ancestral home, on the thumping "Korea," and a bit further in the docile keyboard ballad "What I Think About When You Say South Korea."  In the latter he alludes to spending time there at some juncture in his life, but ironically, just about the entire remainder of Ten Hymns... speaks about growing up in such landlocked locations as Iowa and Missouri.  So landlocked in fact he refers to making it to California as the equivalent of reaching "the end of the universe" on "Fuel America."  This dichotomy is never fully explained, but Choi's soaring, melodic prowess and detailed vignettes makes such juxtapositions irrelevant - and that's where the magic really lies in veritably any song he attaches his name to.  But it isn't just wanderlust he extols on.

"Nixon" employs a word salad approach to humanizing our 37th president, while his ample gratitude towards "Thurgood Marshall" is yet another choice iconic foray.  "The Public School System," an acoustic piece largely ensconced in an adolescent motif, also manages to tap into a class-struggle ethos, a la Tracy Chapman, and "You Don't Call Me Anymore" is a patented tale of romantic disconnection.

Even if Andy Choi's slice-of-life scenarios and confessional inclinations weren't as poignant as they are, his nimble and often soulful vocal panache would be worth the admission fee alone.  Fortunately we have the luxury of experiencing the best of both worlds.  You can do so digitally via Amazon, iTunes, or on clear red vinyl straight from Anyway Records.
Posted by spavid at 3:18 PM

Sounds like a cross between john popper, the guy from barenaked ladies and john samson. but surprisingly not as annoying as that should be.