It didn't occur to me until today, but Redd Kross's tenure has spanned four decades (though not a whole lot of this one).  Funny how the math works out like that.  From bratty, idealistic punks to transcendent pop/rock brokers the brothers McDonald have always been...themselves (albeit on a slightly inconsistent performing basis).  Since their third album, 1987's transitional Neurotica, Redd Kross' songwriting has been nothing short of meaningful - skewed and conspicuous as that meaning frequently is, and much like their adopted moniker they've truly matured into an institution.  But I probably don't have to tell you this. 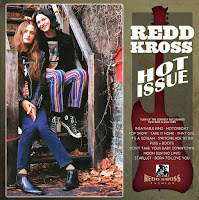 This entry concerns two very limited run offerings the band has been self releasing...and selling exclusively on Ebay.  Why the online auction behemoth is their sales outlet of choice isn't entirely clear, as they could sell their music for fixed price anywhere, but that's hardly a gripe.  Last year we were treated to a CD-r reissue of their self-titled, 1981 ep, but the gravy began to flow in full this June with the roll-out of Hot Issue, a vinyl-only LP limited to a scant 500 pressing, showcasing predominantly unreleased studio material.  Curated by Jeff McDonald, Hot Issue is something of a die-hard's holy grail, particularly for ears keen on R/Ks mid-90s studio records Phaseshifter and Show World.  Why?  Well, that's where a plethora of Hot Issue's bona fide studio outtakes are derived from (though frustratingly, we aren't provided with track-by-track dates of origination).  At least one selection (presumably "Puss 'N Boots' from the Hell Comes to Your House comp) stretches back to 1983, and the record even fast-forwards to 2007 for "Don’t Take Your Baby Downtown," a revealing and highly appealing demo of 2012's Researching the Blues "Stay Away From Downtown."  Overall, it's fun listen, and BTW, if you're gonzo for Marc Bolan and T Rex, "Insatiable Kind" and "Motorboat" just might be worth their weight in glammy gold.  For more details on Hot Issue, check out Redd Kross's website...but don't expect to find a purchase link.  Naturally, I'm sharing the whole kit and caboodle below. 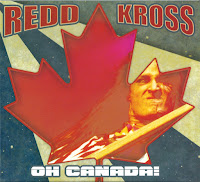 Hot on the heels of Hot Issue came the compact disk, Oh Canada! Hot Issue 2, Show World Live, similarly confined to a few hundred copies.  A seemingly simple premise of a live Redd Kross gig in Vancouver, BC in 1997 is more rewarding than expected, with the group firing on all cylinders and tauter than a duck's behind.  The first bundle of tunes draw on those '90s-era studio records I mentioned above, but Oh Canada! concludes with an exclusive four-part song suite.  It commences with a brief traipse through Linda Rondstat's "Silver Threads and Golden Needles," and gets considerably more long-winded and indulgent from there.  Not enough to scare you off mind you. Trust me, you'll get through it.

I'm making both disks available in their entirety below, but the links may disappear sometime in the near future, so don't sleep!  Bon appetit.

Removed by request
Posted by spavid at 3:17 PM

Wow! Thanks for these! Awesome rarities!

Thanks great stuff.looking forward to listening to these.

Awesome! Thanks for the Redd Kross and all your postings!

this is fabulous!
thanks for all!

I have 2500 Redd Kross Fans Can't Be Wrong 10" on vinyl, but can't find it anywhere in digital format. Any suggestions? Thanks!

I have 2500 Redd Kross Fans Can't Be Wrong 10" on vinyl, but can't find it anywhere in digital format. Any suggestions? Thanks!

Would really appreciate it if you took these downloads offline - thank you.

It is possible to have Oh Canada with e-mail ?

Hello,
is there any chance to have the oh canada by a pm or email?

Instead of taking it down, why not print another batch of vinyl, Redd Kross? I ain't paying 30 clams on Amazon for a single disc!! that's nuts. I LOVE Hot Issue, and would REALLY LOVE owning it!!

Is there any way I can get both of these? Email ? I need thee badly.....Thank You, Eric

Please owner of this blog, send me links for these albums, god knows id give money to support redd kross but im too poor to afford to buy it, keporaay@gmail.com ,Thanks very much in advance man!