The Bandables - An appreciation of.

Last December, as part of my Chanukah uploads series of out-of-print records of yore that warranted "special emphasis" I was pleased to share a single I had long been seeking by a downstate New York act dubbed The Bandables.  The 45 in question (Cynicism b/w Love Lies Down) was the band's only full-scale release, and back in the '80s when a record was minted on a small indie label, "full scale" often translated to modest distribution at best.   Lack of notoriety aside, when a band gives you a record this striking you want more.  Preferably a lot more. 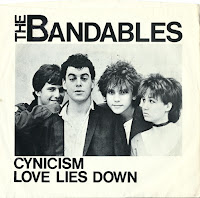 Given my enthusiasm of that one-single-wonder from 1984, I did my homework to uncover what became of the Bandables and if there was any more ear candy to be had by them.  As luck would have it my timing was spot-on, with the group establishing an archive of sorts via the miracle of facebook with photos, memorabilia and details of their not-so-crazed exploits in the vicinity of the five boroughs.

In 2014 it was revealed that the band had more music on the reels than the "Cynicism" single, and plans were potentially in the offing to make some/all of it available.  While we're not taking any credit on our end, more music by the Bandables has indeed come to fruition.  The sessions for the abundantly aforementioned 45 yielded about another seven songs, all of which have been recently Bandcamped.  In my original critique of "Cynicism," I opined that the band's assertive power-pop stride owed a debt to the Pretenders.  Amy Miller had her hands on the mic for that one, and despite a rather uncanny likeness to Chrissie Hynde, the Bandable's swagger was considerably more modest.  That modesty lent itself to a cozy solace of sorts, wherein the quartet fused the forward thinking pop smarts of Let's Active, a dollop of Peter Buck jangle, and even some occasional bubblegum tangents.  You aren't likely to hear the warm, analogue reverb of "Hard to Tell," and "A as in Any," emanating from any of today's hipster boilerplate hopefuls.  The fidelity of some of the Bandcamp tracks leaves a bit to be desired, but then again it's only appropriate that music this authentic should sound this authentic, tape hiss be damned.

If the pictures above weren't a dead giveaway, The Bandable's were a co-ed endeavor, with Amy trading off on vocals with Jerry Kitzrow.  I'd be remiss if I failed to mention this foursome was so damn photogenic they would have been a shoo-in for Sassy magazine's Cute Band Alert segment, had that publication existed at the time of these recordings.  With that out of the way, head over to Bandcamp to check out this superlative tuneage for yourself, and  if you enjoy what you hear please consider patronizing the Bandables for their efforts, posthumous as they may be.  For even more immediate gratification, check out the video clip for "Cynicism" below.

This blog should take credit for the unearthing of additional tracks! I helped the Bandables get these tracks prepped for bandcamp and I never would have tracked them down on FB if I hadn't heard about them here first. Improved fidelity on these tracks is coming to cd baby and/or bandcamp soon. Stay tuned! If you like this be sure to check out Amy's current project Yippee Coyote and Jerry's current band The Flurries. Let's just say the Bandables were no fluke, these are talented people.

Thanks. Am just happy the music is finally available. Talented folks indeed.

It has been my pleasure to enjoy the talents of these musicians for over 30 years. Glad to see them recognized for their contributions to music!

I just popped over to Bandcamp and purchased the tracks. What great stuff! After three decades you think you've heard every great early 80s indie/jangle pop band... and then something like this turns up. Amazing! Thanks for the recommendation.