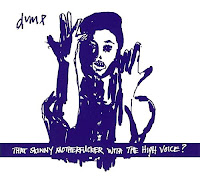 Well, this wasn't how I was expecting to cap off a week chock full of emo releases, but sometimes life and current events throw a wrench into your itinerary.  If you're a hardcore Yo La Tengo fan you may have familiarity with Dump, the lo-fi side project of longtime bassist James McNew.  I've barely followed YLT over the years, and for better or worse I've paid considerably less attention to Dump.  By the time I learned of the premise involving That Skinny Motherfucker... I'm sure the album had long been out of print, and since I wasn't an acolyte of McNew or the artist the album was dedicated to, I saw no harm in downloading it gratis a few year ago when the opportunity arose.  It won't faze any of you to learn that I wasn't a mondo Prince devotee, owning a nicely packed best-of collection of the purple one and little else.  I'll get to some personal observations in the next paragraph.   As for Skinny "Mofo," it's a covers/tribute album and an ironic one at that, boiling down twelve Prince tunes to their core, essentially leaving nothing but the lyrics and melody intact.  McNew's approach is sonically diametric to the original compositions, yet wholly respectful to the Artist himself.  In short, there isn't a semblance of ridicule or mockery within earshot here, but accoutrements ranging from omnipresent drum machines to Casio organ and even acoustic guitars make for a startling makeover when applied to staples like "1999" and 'Raspberry Beret."  Beyond that, "Pop Life" and 'An Honest Man" are transformed into affecting, insular soliloquies, and "A Love Bizarre" is given such a loopy, avant upgrade it borders on alienating.  Skinny... is a profoundly a-traditional homage, yet heartfelt in it's skewed reverence.

I started listening to rock and roll in earnest around 1983.  Local Top 40 outlets provided my gateway, and at the time Prince was ubiquitous.  A minimum of one album a year, and seemingly a new single every month.  The mid-80s was the last era that commercial radio was genuinely rewarding, even though it's returns would diminish exponentially in the years and decades to come.  Prince was there for that cutoff point, and his presence was so saturating that I simply took him for granted, until I stopped paying attention altogether by the time I hit college.  In more recent years I admired and envied the sheer carte blanche he was accorded via his own Paisley Park studios, and a record that label that grudgingly came around after many years of hemming and hawing, eventually catering to his whims.  He led a challenging but unbelievably charmed life, the likes of which we can only fantasize about.  His passing this week was equally shocking and smarting, and even casual fans like myself will be ruminating on the "why" indefinitely.  RIP ol' three eyes.

I thought I liked both Prince and Dump well enough, but ad no idea this existed. Wonderful.

Perhaps just as interesting is the purple one's reaction to this heartfelt tribute.
To say he wasn't pleased is an understatement, as he bullied the tiny Shrimper label into deleting this from their catalog......far from his finest moment.

"The mid-80s was the last era that commercial radio was genuinely rewarding". Well, that's why I'm here, although in truth for me there was that little bit when it seemed like power pop would breakthrough -- the "Matthew Sweet era" as it were -- in the early 90s but that got crushed by the worst popular music era ever that basically destroyed popular commercial music in the Boston area -- the Limp Bizkit era as it was.

Anyway, we loved Prince. He seemed to be able to do it all. Then he got a little less rock and more meandering. Then I couldn't keep up with the releases. Still, one of the best Super Bowl halftime show in recent years.

A pity for the music fans because it really seemed like he was seeking to reassert himself in the pop world (originally typed as "poop" world which is funnier).

Of course a bigger pity for him and his loved ones.

P.S. Plus he "created" the PMRC and music labeling thanks to a line in Little Nicki. And he produced an album for Kim Bassinger.

Glad you're enjoying this.

Was wondering what (and if) Prince thought of this tricky tribute, and you've adeptly satisfied my curiosity lucky. You think he would have had bigger fish to fry.

A fine summation Bruce. It was my intention for Wilfully Obscure to function as a surrogate for once halfway-decent top 40, but I'm game. I don't many people could keep up with his deluge of releases, some of the latter ones a bit ill advised from what I hear, but anyway. Still a huge bummer.

Hey there, first of all thank you so much for this post and honestly I was searching for the same information from last few days. Keep posting and keep sharing.

Thank you for this. A very cool covers album. Is it a tribute or just merely a respectful covers collection. Anyway it is cool.

I followed, w/some difficulty, Prince in the later years (it hurts to say that). It's very scattered and he was so productive I was never sure what to make of certain collections. But I can say there are some absolutely stellar tracks buried among the lot, stuff that matches and in some cases surpasses the tracks everybody knows and loves. Hopefully, and unfortunately, I hope they reach more folks. You would gain even more love&respect for the mighty purple one. And let's see what's in the vaults when they, unfortunately, raid them, which they are bound to do. $$$$$. Absolute genius. Truly.