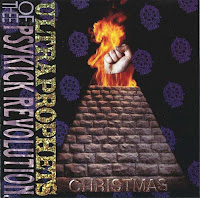 The utter perils of naming your band Christmas, let me count the ways.  Granted, that's merely my perspective but to their credit this Boston trio had a bevy of substantive tunes in their Santa sack.  If memory serves, I introduced you to these guys (and girl) roughly eight years ago with a 1984 single that predated their first album, '86s In Excelsior Dayglo. Ultraprophets... was their follow-up, and it commences with a colossal bang in the guise of "Stupid Kids," a driving, somersaulting rocker that plies punk-induced thrust to a riveting melody hook that infects the entirety of the tune, not merely the chorus.  Holy fuck.  In fact, it's so righteously gratifying that virtually nothing that follows can hold a candle to it, hence Ultraprophets... fatal flaw.  Side one is clearly the better half, housing ruminations ranging from nuclear war to Richard Nixon.  Drummer Elizabeth Ann Margaret Cox bears most of the vocal burden, lending just the right tact to Christmas' crisp, artful aplomb which sonically slots somewhere between latter-era X and the B-52s.  Aside from the rather visceral "Stupid Kids" this album is something of a grower.

Additionally, one of our readers was thoughtful enough to assemble Christmas' non-LP recordings, such as singles, compilation tracks, etc.  Fourteen songs you can have here.  The link to Ultraprophets... follows below.

Wow, thanks so much for your reader's contribution. I love this band. Wore out my tape of Ultraprophets, and bought it again on CD. The rocking "My Operator" and the lovely "Great Wall of China" are two of my favorites. Thanks again for the link to Christmas Past!

I just spun this one a few days ago

You have to wonder what they were thinking when they came up with some of the lyrics:

They were a great band and I enjoyed Combustible Edison too.

You're welcome. Thanks for the comments.

Never really checked them out at the time, but boy did they get a lot of positive praise in Boston at the time. So, now is my chance to see what the excitement was all about.

Just found this blog, searching for Christmas (the band) who, unsurprisingly, are difficult to search for! Is it possible to get that collection of non-album tracks you mention? Please?