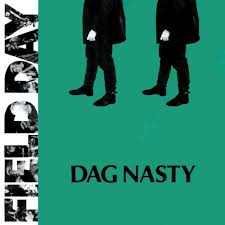 Oh boy.  Field Day might not be thedeal jumping off point for an introduction to Dag Nasty, but it was in fact mine.  You'd be well advised to start chronologically with 1986's primo hardcore standby, Can I Say, featuring the classic DN lineup of Dave Smalley on the mic, Colin Seers on skins, Brian Baker on gits, and Doug Carrion carryin' on with the bass. Something of a blueprint for melodic hardcore in the Ronnie Raygun-era, Can I Say boasted ten incendiary blasts that were oft imitated, and rarely (if ever) duplicated.   Smalley's exodus before the band's follow up venture, Wig Out at Denko's entailed the entry of new mouthpiece Peter Cortner. Wig Out's notable mid-tempo nuances couldn't prepare DN's fanbase for the radical departure of the quartets "difficult third" LP, Field Day.  You see, in '88 the then-established Nasties double-dog dag dared their minions with a patchwork of eighteen meandering, stylistically curious songs that by my estimation upended their reputation to the extent that the only thing sensible to do was to splinter shortly afterwards.  Which they did.

Often exuding the tenor of a bewildering music salad than a logically flowing record, even the best results here are undercut by processed production treatments and gloss that sound unnatural in the Dag Nasty realm, especially on the heels of the two albums of fiery, unadulterated punk.  Nonetheless Field Day houses many respites like the Descendents-y "Here's to You" and title track.  A run though of the Ruts (UK) signature tune "Staring at the Rude Boys" is taut and convincing, and so is the gripping "Dear Mrs. Touma," a piece concerning the loss of young man due to a senseless act of violence.  Then there's a retake of Can I Say's "Under Your Influence," which is arguably turned into a neutered mockery here.  There's also plethora of quasi-ballads and introspective pieces juxtaposing with the relatively aforementioned old-school numbers.  It isn't that a "soft" Dag Nasty is a "bad" Dag Nasty, but jarring nonetheless.  A key example is "The Ambulance Song" which finds Baker dipping into blues-lite guitar fills of all things.  There are even more inconsequential forays clogging up Field Day, but I'll spare these guys any more scathing.  Things do end on a high note at least with the inclusion of "All Ages Show," a thrashy, melodicore punk-pop gem that brings the band's potential well into the foreground.  "All Ages..." appeared on a previous single of the same name along with "You're Mine," which is also appended.  As for DN's Americanized spin on Wire's "12XU," I'll let you be the judge of that.

Field Day is certainly not the band's finest hour, but it is their most intriguing.  Not long after, Brian Baker made his way into the lineup of Junkyard, a slavishly sleezy metal outfit in the mold of Guns 'N Roses.  Colin Seers parlayed his talents to one of my personal '90s faves, The Marshes.  The '90s also saw a Dag Nasty reunion album, Four on the Floor, with Smalley back in the drivers seat.

really a great album. Thanks

This was also my first Dag Nasty record and for that reason, I'll always love it. New EP with original singer Shawn Brown comes out next month:

Thanks for your comments, and the heads up on that EP. Interesting.

Probably my favorite Dag album. I'm just grateful I got to see these guys exactly once (Wig Out tour, with 7 Seconds), and Peter even gave me a t-shirt. Listened to this and Wig Out non stop through those years. Good stuff, mostly still holds up. Wish they'd do a show with Peter singing sometime.

I don't remember if this was my intro to DN but (risking losing some punk rock stripes here)its my favorite. Similarly, Ourselves is my favorite 7-Seconds album.
This DN album is so near and dear to me that I was surprised to see it here as "obscure".
Also very un-punk of me, you should check out Grave Goods. Another Colin Sears post DN band.

The first song from the LP, "Trouble Is," was remixed by Ed Stasium and subsequently sounds MUCH better than the original, band-produced version. Giant released it as a 12" single with two other songs. It also ended up on a CMJ compilation, which was the only time it was on CD. Since you already uploaded the other songs from the 12", I threw the remix from the CD and alternates of the other two songs into the file below:

It also includes alternate mixes of the "All Ages Show" 7" and the original version of that song recorded a couple of years earlier, as well as the unreleased "What If" session from 1991.

The Marshes and Grave Goods were awesome; Rumblepuppy is another of Colin's bands worth hunting down. He was also in Los Vampiros, whose sole LP had Dag connections.

Thanks for the excellent blog!

I'm going to see Dag Nasty at the end of this month.They touring Europe.My fav band from Dischord along with Scream.
Any of you nice people have some mp3 of side project called BLOOD BATS.They had two albums.
First one is Fatal Book Opened and second one is Stopping A Freight Train On A Dime. I'd appreciate any link.
More info here https://www.discogs.com/artist/1967759-Blood-Bats

It´s cool to see so much appreciation for Field Day and also for Grave Goos, pretty cool band that would probably went unnoticed if Colin wasn´t the drummer.

Ask and you shall receive.

Bloody Mannequin Orchestra's "Roadmap to Revolution" (with the original "My Dog's a Cat" amended): http://www75.zippyshare.com/v/LZjypWY4/file.html

a simple heartfelt thanks

Glenside, thanks for the links!

Sorry I haven't been keeping up with everybody on here! Thanks so much to everyone who's pitched in with comments, info, and of course the bounty of bonus uploads and such. I actually have the Rumblepuppy disk but was never a particularly big fan of it.

You shared a very informative topics that readers would always love to visit. Thanks for taking time sharing this with us. Visit my site too #triciajoy.

I'm so glad to have found something informative in your site. Thanks for sharing.

Dag related question: anybody have the demo for Brian Baker's post Minor Threat/Pre Dag Nasty band "The 400"? Would love to hear it for curiosity's sake.

Any chance of re-upping those Blood Bats albums?

glensidebearings can you update links . They all dead. Cheers

Could you please upload los vampiros again? I cannot find it anywhere and I lost mine. Thanks