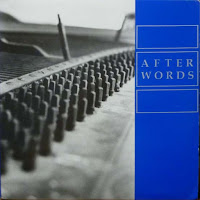 I was happy to make my acquaintance with this Atlanta, GA bunch, even if it was a quarter-century belated.  I found this amidst a mammoth day of browsing last year in various Pittsburgh vinyl stalls.  I instantly equated After Words' label, Sammich, with higher profile acts on the same DC imprint, namely Shudder to Think, Swiz, and Soul Side.  Sammich was affiliated with Dischord Records, and after partaking in one cursory listen to After Word's lone album it was evident why these youngins' ostensibly wanted to be part and parcel of that renown Washington corridor.  If this come across as a dis, I apologize preemptively...but AW were the spitting image of unwitting emo pioneers Rites of Spring, the lauded D.C. post-hardcore quartet that served as a launching pad of sorts for Guy Picciotto and Brendan Canty who would make a name for themselves in Fugazi by the early '90s.  So striking is the resemblance between the two bands, separated all but by three or four years, it would be almost forgivable to cast off After Words as prodigious imitators (just as much so as D.C.-based Rites clones Rain, but I digress).  Nonetheless I can find plenty of merit among these eight swerving grooves, bristling with the fervor and forward-thinking penchant that made Rites of Spring (not to mention Ian MacKaye's short lived Embrace) such crucial touchstones in the '80s.

Great review. Thanks. I never got to read reviews of our record when we were actually around. No need to apologize for a Rites of Spring comparison. We were also influenced by bands like Moving Targets, Squirrel Bait and Husker Du.