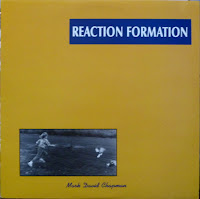 I can't begin to rationalize why anyone would name a record after someone so hideous.  That aside, the six songs enshrined within compensate tremendously, with the first half residing in the realm of latter-period Mats, Material Issue and even Minneapolis' unheralded Magnolias.  "Teenage Jesus" has all the makings of a scruffy classic.  The remainder of MDC is less fiery, but nearly as appealing with "Share" and "Jeff" wielding a janglier aptitude that must have slotted in well on left-of-the-dial playlists, de rigueur in Reaction Fromation's day.  A smattering of singles were cut by these guys as well, one of which, "Galesburg Bound" you can try on for size here.

I saw this band live at The Patio in Indianapolis in the early 1990s. Totally forgot about them until you posted this.

would love these for the next round of re-ups if ya still got em!