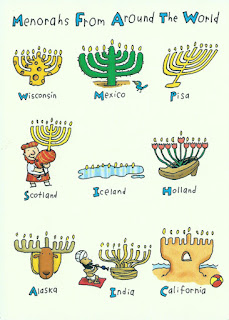 There hasn't been much activity on this page in the past week, and it shall remain that way until Sunday evening (EST) is upon us.  In what has become an annual tradition on Wilfully Obscure (not to mention the ever increasing bane of my sanity) I'll be rolling out extra special, super duper entries over the week of Chanukah.   Beginning in 2012, I decided to spread the goodies out over the eight nights of Chanukah (check out the preliminary details for 2012, 2013 & 2014).  This made sense on a couple of different levels.  For one, it gives me a convenient excuse to share several mind-blowing "gifts" instead of just one mind-blowing whopper on Christmas.  Secondly, Chanukah represents personal relevance to me.  We all know you were envious of that boy down the block who had a yarmulke festooned to his head, who was given the privilege of lighting the menorah, and of course, reveling in eight glorious nights of presents.  Once again, I'm paying it forward.  Previous Chanukah entries have featured Wire, Velocity Girl, Jellyfish, The Pursuit of Happiness and Redd Kross, but name recognition is not necessarily guaranteed.

NOTE: I'm shaking things up ever so slightly this year.  The first entry is so mondo and overwhelming it could easily absorb all eight nights of the season by itself.  I decided to compromise and whittle it down to two night's worth of presents instead, with the remaining six nights resuming Tuesday.  Trust me, you won't have any complaints, However...I'm making Sunday night's elephantine offering available for ONE WEEK ONLY.   When Chanukah is over the links for this particular entry will be decommissioned as well.  The remaining of the holiday booty will remain available in perpetuity, as per usual.  It just might be the most significant share I've offered to date.  In other words, don't sleep.  And make sure to tell a friend or two once it's live.

All of this begs the question, "Has Wilfully Obscure been holding out on us for the last 11 months?"  Somewhat...but not quite.  In short, the presents I plan on revealing over the eight nights of Chanukah are of considerably high caliber.  I like to think that everything I share qualifies as good to excellent, but to paraphrase that sage Orwellian dictum, some are more equal than others.  One final note of housekeeping - I will forgo Mystery Monday for the next week in order to maintain the continuity of the holiday as it falls on the calendar.

See you Sunday night.
Posted by spavid at 5:22 PM

Thank you so much for this site. So many of my favorite obscuro items discovered recently were "discovered" by coming here. Honestly made my life better. Thank you.