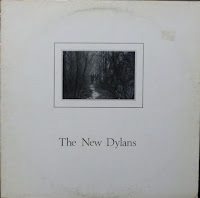 Now this one's kinda special.  Almost dedicated a Chanukah entry to it this year.  Where do I start?  The New Dylans were from Warren, PA, and for all I know still might reside there.  I encountered them for the first time very belatedly in 2013 via a used copy of their debut full length, Warren Piece, and have been enamored ever since.  The core lineup of Jim Reilley and Reese Campbell were aided and abetted on this 1986 record by none other than two of their contemporaries in 10,000 Maniacs, J.C. Lomabrdo and Jerome Augustyniak, filling things out on bass and drums respectively.  A far different animal than the Maniacs, The Dylans had a predilection for folk-enhanced singer/songwriter pop-rock, bearing a heart of gold's worth of wit, charm, and dare I say empathy. They didn't necessarily peak on this ep, but don't tell that to Michael Stipe, who from what I've read was absolutely floored by this at the time (and perhaps the respect worked the opposite way evidenced by the collegiate-rock sway of "The Pampered Wife").  They break out the accordion for the swingin' "Doreen," another exemplary track that would later find it's way to Warren Piece.  And then there's "The Primer of Life," a three minute jewel that qualifies as one of the fifty best jangle-pop songs I've ever laid ears on, due in no small part to a knockout chorus hook, and a dazzling Peter Buck-indebted guitar fill.  Things ebb a bit with the peculiar "Suburban Shopping Mall," just before the band brings things in for a landing with the consoling, acoustic ballad "Old Overcoat."

Two subsequent records followed in the '90s, the aforementioned Warren Piece in 1993, and The American Way two years later, both on Red House Records.  As an addendum to the ep, I've tacked on a song or two from each, comprising some of their career best, namely "You" and "Desmond."  The New Dylans reconvened for their third album, Meta, issued this very year in fact.  Believe it or not, there was a low key documentary on the making of Meta, which you can avail yourself to right here not to mention a separate in-depth article.

bonus material:
Desmond & The Prodigal Son Returns (from Warren Piece)
You (from The American Way)

Wow! Thank you for such a nice tribute! It is much appreciated! Follow our latest exploits on www.thenewdylans.com or Facebook.com/thenewdylans. Jim Reilley

Pleasure to hear from you Jim! Many thanks for so many superlative tunes, and Happy Holidays as well.

Hello
I hope you're well.
Can you, please, repost this EP?
Thank you very much
Stathis