**The music links in this file are no longer active, as I have not been granted permission to share them.  My apologies and thanks for your interest.**

Where do I even begin with this one?   First and foremost, here's the general basis behind this whole mondo ball of menorah candle wax.  The 162-song I Got Kinda Lost is not a physical product (despite the jewel-box thumbnails depicted a little further below).

Initially prepared in 2007 by an obsessive Big Star adherent(s) as a four disk compilation, IGKL represented a parallel version of the band's catalog with all material represented in the form of demos/alternate takes/mixes/outtakes and the like.  It was expanded to double that length some six years later, coincidentally or not after, the release of the official 2009 Big Star box set, Keep An Eye on the Sky, and in 2013, the Nothing Can Hurt Me documentary soundtrack.  In essence, the premise of IGKL was to corral every abandoned take or mix of every Big Star song known to exist that didn't carry over to the group's original three albums: #1 Record, Radio City, and Third/Sister Lovers, circa 1972-75.  For an even better frame of reference, this collection serves the same function as Bob Dylan's recently released omnibus, The Cutting Edge - not a single note left behind.  Additionally, it excavates the prehistory of Alex Chilton and Chris Bell prior to joining forces in Big Star.  For a more "together" wrap of what this set entails here's a blurb from the liner notes (included in disk one). 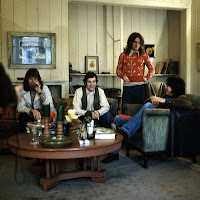 This is the expanded 'I Got Kinda Lost' unofficial Big Star box set. Previously this set contained four discs and was jam packed with all kinds of Big Star related tracks.  Like the previous incarnations of 'I Got Kinda Lost', this expanded 2013 release attempts to tell the story chronologically of Big Star through their studio outtakes and alternate versions by keeping it more Big Star-centric through the prism of Chris Bell and Alex Chilton - the architects of the band.


The tracks are split up between the CD's to a timeline that carries the listener from 1965 to roughly 1975.

This massive compilation is what one would call a 'fantasy release'. It's designed to look 'official' but clearly it is not.  In fact, this box set carries a fake catalog number - ST100/6 which is a direct homage to Chris Bell and Andy Hummel who briefly had the idea (as a joke) that if Ardent/Stax didn't release their completed #1 Record they were going to do it themselves (à la bootleg it) and give it the mythical catalog number ST100/6. Their little idea has now come full circle back to that very same idea, like a bridge to the past.

With that out of the way you're likely to want to see the tracklist NOW.  You can do so in pictures of the sleeve art here.  Each disk contains a folder of all scans specific to that CD. I have provided a brief disk-by-disk synopsis' below, however I offer all of this to you with a few vital caveats to bear in mind before diving into the well.
Onto the disk-by-disk summaries.  Links to both MP3s and lossless FLAC are provided. 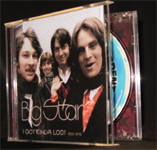 Disk 1. An all pre-Big Star affair beginning with four cuts from the short-lived Memphis combo The Jynx, featuring Chris Bell on guitar.  A bit further in our some psych guitar workouts from Chris, as well as recordings from his collaboration with singer/songwriter Terry Manning.  The latter half of disk consists of alternate takes from Alex Chilton's 1970 Sessions.  23 tracks total.

Disk 2.  Commences with five tracks with Terry Manning teaming up with Alex.  Among the tunes is the irrepressible bubblegum chestnut "Sugar Sugar."  The bulk of the disk is all Chris, and his two immediate precursors to Big Star, Rock City and Icewater (yep, all one word).  I prefer Icewater'a tunes to Rock City's by a hair.  Early versions of "Feel" and "My Life is Right" make appearances.  20 tracks in all.

Disk 3.  Here's where the first ladle of gravy meets the plate.  Alternate takes and mixes for the first half of #1 Record, including a fairly radical alternate recording of "The India Song" with different lyrics.  Other songs represented include "Feel," "Ballad of El Goodo," "In the Street," "Thirteen" and "Don't Lie to Me."  21 tracks.

Disk 4. As you might expect, outtake incarnations of the remainder of #1 Record, featuring "When My Baby's Beside Me," "My Life is Right," Give Me Another Chance," "Try Again," "ST100-6," and no less than three versions of the non-LP charmer "Gone With the Light."  45 seconds of studio banter and jamming to boot.  22 cuts.

Disk 5.  This one kicks off with some alternates of Chris Bell solo classics, with no less than five different versions of "I Got Kinda Lost."  A bit further in we encounter the makings of Radio City, with solo Chilton demos of "Life is White," and "What Goin' Ahn" clearly still works in progress.   "O My Soul" makes the cut four times, and "Way Out West" turns up with a vastly different vocal track.  18 songs.  .

Disk 6.  Part two of the Radio City-era recordings.  It's an overkill onslaught of "Get What You Deserve" and "Mod Lang," with "Back of a Car,", "Daisy Glaze," "September Gurls," and "Morpha Too" also present and accounted for in various different mixes.  Great stuff, but again, these disks cater to the most dedicated among us.  20 tunes.

Disk 7.  We roll into the Third/Sister Lovers sessions, packed with revealing demos of "Holocaust," "Nightime," and "Thank You Friends."  Surrounding these prototypes are alternates of "Jesus Christ," "For You," "Big Black Car," and "Kanga Roo."  23 cuts.

Disk 8.  Here's where the bottom of the barrel meets the scraper.  The eighth bag of tricks kicks of with no fewer than five version of "Lonely Day," a song that was eventually massaged into "Stroke it Noel" from Third.  There's outtakes of deeper album cuts including "Downs" and "Nature Boy," and we even get an alternate version of "Hot Thing," the "new" B/S song that appeared on the bands own tribute album Big Star, Small World.  The disk concludes with Chris Bell having the final say with a clutch of solo rarities.  15 tracks.

bonus: Till the End of the Day, 1974.  A live Big Star performance in Cambridge, MA, March 31, 1974. I don't have a wealth of details to impart on this one.  A very solid set that's either a soundboard tape or a fantastic audience recording.  "Femme Fatale" is covered.  Given the lineup of Alex, Jody and John Lightman, the only #1 Record song making the eleven track setlist is "In the Street."   This is a beaut.

Enjoy, and remember, this is a one-week only proposition.
Posted by spavid at 2:59 PM

Grabbed this off another site a while back. Great boxset. Made alternate versions of #1 and Radio City for confusing friends.

Thanks so much for this - I bought the "commercial" box when it came out and I'm looking forward to sifting through this to figure out what I don't have. A really great present!

Wow, you hyped this and it does not disappoint. I can't wait to dive into this. Thanks and Happy Chanukah!

Thanks, and Happy Chanukah!

This is amazing! Thanks a lot.

very nice
If only every interesting band had a fan(s) obsessive enough to go to such extreme lengths the world would be a better place.

Many many thanks. I watched their documentary a year or so ago and immediately bought their three albums and Chris Ware's solo album. This is exciting!

Great gift for their many fanatic fans. After first hearing of the 4-CD version I spent a couple of years looking for it on the non-torrent sites with no luck, until an online friend came through.

Just this past weekend I was cleaning out some of my junk/archives and noticed the cassette tape on which I first recorded the first two Big Star albums from the import LP's of the third-floor neighborhood at Somerville I. A revelation.

Glad you're enjoying this. It's a treasure chest of pop proportions.

What a haul! Many thanks for sharing. I'm old enough to have bought
the first two BG albums as cut-outs back in the 70s, so I've lived
with them for decades and decades, and these new versions are a
joy to hear. Thanks again, and Happy Chanukah!

This is quite incredible - thanks for sharing! :)

This is overwhelming and wonderful, thank you! But, I am having an issue with unpacking the .rar for discs 2 and 4. Tried two different programs (Unarchiver and UnRarX). Anyone have any suggestions?

I'm all atwitter. Can't wait to start listening. I have a few Big Star boots, but I'm sure there's a lot I haven't heard. Thank you in advance.

Could you post the covers for each disc? That'd be awesome

Thanks so much for this avesome upload of BIG STAR,Im very happy to be able listening to these CDs.
This is so great Yepp!
Thanks again and Cheers Dan!

Hi Spavid. Judith from BOAC mag here. Great news! judithbeeman(dot)com has been up for just a few days. Everything concerning my Big Star zine can be read for free. All four issues, all the music. Best wishes, Jude

Thanks to Jon Dale for alerting me to this treasure trove and even bigger (star) thanks to Wilfully Obscure for sharing.
Chris Coleman (Seventeen)
Hi there Judith BOAC!!!

Chris Seventeen is in the house! Howdy old bean. Hands across the water and all that. -- Judith

PS. Psst, everybody if you have a chance to look at the BOAC page and stream the TEENSTER CD (watch out ya can't do too many skips) hang in there until the end where you hear me singing The Ramones I wanna be your boyfriend (#1 teenage fantasy of recording a song checked off my bucket list.)

Thanks for sharing these. Having problems DLing the last 2 FLAC folders; keep getting an error message (please try again later). Waited 24 hours, cleared cookies, but no luck.

Astounding work on this, thanks so much! Just curious -- are all the "exclusive" tracks on this release (http://www.discogs.com/Big-Star-Jesus-Christ/release/7781439) also on this set? I didn't see the "untitled instrumentals" listed anywhere.

The response to this has overwhelming, and your comments are always appreciated.

TaterBones, I tried to download the FLAC versions of Disks 7 & 8 and they're functional. Not sure what the issue is.

I think the instrumentals are exlusive to the Black Friday Big Star release. An official Third/Sister Lovers box set is in the works for next year.

Forgot to update, I downloaded those two mp3 .rar packages for 2 & 4 again the next day and they worked flawlessly. Thanks again for this!

This is fantastic, spavid. Does anyone have the Lesa Aldridge version of "Till the End of the Day" to share?

Hi again guys. Judith from BOAC here. I was poking around Willfully Obscure and Spavid has Yuji Oniki's amazing debut album, Shonen Blue (this was the one that had a sticker saying "real good" by Alex and another comment by Scott Miller.) A wonderful album!

Many, many sincere thanks!

Thanks a lot, this looks fantastic. Came across this today, I'm downloading as fast as I can...please leave the files up until tomorrow. Pleeease :-))

In a word: INCREDIBLE! Many Thanks.

Can you re-up disk 1 somehow I ended up with Disk 2 twice.... amazing site

if any of yall have working links, please holler. in return ill give you access to my music collection via mega upload, google drive, etc. theoctavist@gmail.com

What's your music collection consist of?

It's updated now and expanded. The 2013 version on this blog is out of date.
And yes I have the new link - to the 2016 version - lossless not mp3 garbage.

OMG. Any chance of an reupload please?

All I can say is WOW. Took some searching, and a lot of patience, but I was finally able to download this. (Use your web fu - it's out there.) And it was worth all the effort and time. Thank you so much for such a great compilation!

Please re-up. The links are dead.