For this eight and final night of Chanukah, I thought I'd share my nostalgia with you.  In fact this is definitely not just a trick of the light.  You have at the base of your sleeves three semiprecious, out-of-print Chameleons compact disks, two of which are imports.  I'm a pretty dedicated acolyte to Mr. Mark Burgess and his crack backing band.  Established in Manchester, England in 1981, the Chameleons inserted bold, eminently powerful tension into what would have otherwise been a quartet of dime-a-dozen post-punk hopefuls.  Characterized by echoey, shimmering guitar exploits and Mark's austere vocal command, the Chameleons were lazily pegged as "goth" by some.  There were essentially three proper albums to the band's credit prior to their 2000 reunion - Script of the Bridge (1983), What's Does Anything Mean? Basically (1985), and Strange Times (1986). Beyond that are a myriad of vital singles (compiled on The Fan and the Bellows, and later Dreams in Celluloid), not to mention a cavalcade of live albums/DVDs...and these... 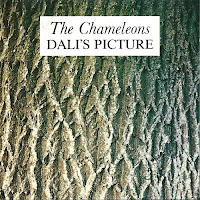 Dali's Picture - Surfacing in 1993, this disk compiles ten demos, presumably when the band was still cutting their collective teeth in the early '80s.  Some of these songs went onto the debut, Script of the Bridge, others to early singles, and one cut, the title track, is unique to this release.  It's a pleasure to hear these songs in sparer, more organic arrangements before the band brought them screaming to grandiose life on subsequent proper records.  Two versions of Dali's Picture exist - one with a bonus live CD, and the other witj just the album unto itself.  My copy falls in the latter category. 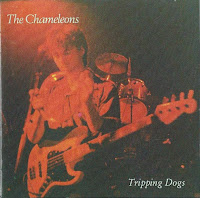 Tripping Dogs - The Chameleons were meticulously documented.  So much so even a taped rehearsal from 1985 saw the light of day in the guise of Tripping Dogs via Burgess' own Glass Pyramid label.  The band had their songs solidly down pat before entering the studio to track What Does Anything Mean?  No huge revelations here, but the performances are tight and we even get a preview of a couple tunes that would be put on the shelf for the next Chameleons platter, Strange Times. 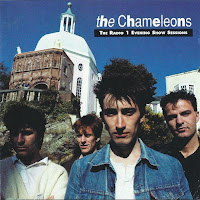 The Radio 1 Evening Show Sessions - I suppose the title gives this bad boy away.  Culled from a pair of BBC sessions, one in 1983, the other following in two years.  Classics one and all - "Nathan's Phase," "Singing Rule Britannia," and "Up the Down Escalator" to name a few. Two versions of "View From a Hill" are provided, including one that was never broadcast apparently.

I've also repaired the link to the Strange Times demos I shared in 2010.

And thus we come to the end of the 2015 holiday bonus bonanza. Thanks for all the tunes. And for making 2015 much more enjoyable. I hope your New Year is filled with awesomeness!

Thank you immensely for your Chanukah posts. Between the Big Star set, The Chameleons (UK) discs and the new Lush 5CD box set 'Chorus,' I am set for the rest of 2015 with some fantastic music. Respect!

Oh boy, they sound swell on 'Dali's Picture'. Wonderful! No bloody digital reverb! Yes!! So much better than original albums, as good as 'The Fan and the Bellows'. Thanks, d.

Thanks for all of the holiday gifts, great as always. The FLAC files on so many are much appreciated. Best wishes for a happy 2016.

Only one of the best bands ever. Just saw maybe their last act in Chicago. Did the Script of the Bridge concert; folks were crying. Magic in that band so thanks

Any chance of re-upping the FLAC files? I'm getting a "This site can’t be reached" message from the links. Cheers.

My file hoster for the FLAC files has gone under. Will try to fix these soon.

Links are dead. Can you reup at some point? Thanks.

Very glad to see a new link to the MP3 version of the Chameleons share. Am crossing my fingers that a re-upped FLAC link will follow!

I suspect I'm being a pest now, but I cannot get the Netkups FLAC links to work for me, no mater what I try on my end. Is there any chance we might see these re-posted?