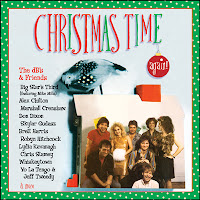 This album jacket may have you doing a double take, particularly if you were a dB's fan in the mid-80s.  Christmas Time was originally an ep in 1985 minted on the late, great Coyote Records.  The idea had been bandied a few years prior between the dB's Chris Stamey and Gene Holder, and with Peter Holsapple on board "Christmas Time" (the song) was cut, exuding the smart, strummy and harmonized penchant that characterized their non-holiday material.  The ep was fleshed out with six more songs featuring different permutations of Stamey's backup band of the time.  Roughly two decades later a vastly expanded CD version of the collection reflected the glow of Christmas lights again, minus, some of the ep's original setlist.  Christmas Time Again! is decked out with a third layer of tinsel this year via another tweaked revamping courtesy of Omnivore.  Bear in mind, this is a compilation, not a dB's album, however they're credited with four songs here, the aforementioned "Christmas Time" among them, and a rendering of "Feliz Navidad" that's a bit too straitlaced for it's own good.  As Christmas albums go, CTA isn't a fruitcake so much as an Xmas eve bowl of Chex Mix where strikingly genteel, easy-listening lullabies from a bevy of virtual unknowns meet under the mistletoe with holiday themed tuneage from some serious alt-leaning luminaries.  These juxtapositions aren't what you would call particularly jarring, and in fact, were you to select this as the soundtrack to your next Christmas get-together few at the party would bat an eyelash.

Marshall Crenshaw offers a ballad for the holiday lovelorn with "(It's Going to Be a) Lonely Christmas," Yo La Tengo & Jeff Tweedy collaborate on the Pomus/Shuman penned "Eight Day Weekend," and Robyn Hitchcock dispenses characteristically cynical and cutting dialogue into the brief "The Day Before Boxing Day."  Then there's another keeper from the original '85 ep, "The Only Law That Santa Claus Understood" by Ted Lyons, who indulged his urge to float a sheet of carbon paper over Charlie Daniel's "The Devil Went Down to Georgia."  By and large, those are the anomalies, but if it's traditional fare you seek, Christmas Time Again! delivers a sleigh's worth of booty.  Alex Chilton doesn't shine any street cred onto "The Christmas Song" (you know, "Chestnuts roasting on an open fire...") but I'll take his reading over Mel Torme's tired rendition any day.  Speaking of Alex Chilton, a live tribute to Big Star (billed as Big Star's Third) contribute a fitting cover of the Third/Sister Lovers classic "Jesus Christ," with none other than Mike Mills on vocals and Jody Stephens, Mitch Easter, Stamey and others backing him.  As previously mentioned CTA bestows it's share of real-deal easy listening numbers too, mostly originals at that.  Not something you'd expect with a record bearing the dB's stamp, but the season 'tis the reason.  It can all be yours from Omnivore, Amazon and iTunes.
Posted by spavid at 8:18 PM

Amazing how many times Chris has "re-booted" this thing. There's also the version released in 2006 on Collector's Choice with 20 tracks (the version that's been on iTunes for a while now). I like the new one on Omnivore, but I wonder how much ribbing Chris is getting from his music buddies about "that Christmas album's five different incarnations," etc.

After "Yuletunes" (for Mimi and me, I don't know which was first chronologically) this was the beginning of great power pop/indie holiday albums.

Those who became teens/music fans in just the last 10 to 15 or so years have no idea how sparse the Christmas offerings were from rock musicians. There was a little bit of an exception from the UK where a Christmas single was a tradition. Over here, however, very few and far between.

Now there are too many!

If somehow someone who reads this site does not have this album (in one of its many formats!), I have a bit of advice: GET IT!

The "easy listening" portion kinda kills the vibe every other song, doesn't it though Bruce? Then again, I don't exactly celebrate Christmas. One song that should have been shoe-horned in that wasn't was Buzz of Delight's "Christmas." Would have fit in nicely with the dB's.

Thanks for the link Rob.

You're welcome, kind sir. Will have to seek out the Buzz of Delight track...