For the uninitiated, The Dickies are a punk rock institution who barreled out of Los Angeles in the late '70s,  Their sardonic wit and oft-costumed antics were seamlessly fused to gonzo melodic structures, beating the Descendents to the punch by a good five years.  And here's another statistic for you relating to numero five - the Dickies are into their fifth decade of existence and still performing under the Dick-tatorship of original leading lights Leonard Grave Phillips and Stan Lee.  Despite their staggering tenure, the band have merely six studio full lengths to their credit, but nearly as many eps and live rekids.  A good place to start would be their first and second albums, The Incredible Shrinking Dickies and Dawn of the Dickies both issued in 1979. 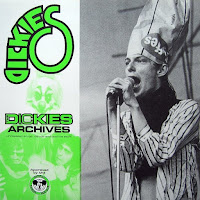 Those of you with any familiarity of the Dickies know the aforementioned blurb hardly does them justice, but then again you've probably been long sold on them.  Presented tonight are a duo of authorized "fan club" vinyl-only boots that were quietly introduced into the marketplace in 1996, which puts them somewhere around the time of the band's fifth LP Idjit Savant.  Volume 1 (green jacket, and in some cases orange) is a mishmash of demos and seemingly random live cuts.  Side A includes a quartet of 1985 demos cut for their fourth album, Second Coming.  "Cross Eyed Tammy" and "Monkey See, Monkey Do" are worth the price of admission of Vol. 1 alone, as is an alternate take of the riff-ramming "Toxic Avenger."  More demos ensue on side deux, the highlights here being a cover of the Left Banke's "Pretty Ballerina," and "H.I.V." which was later rewritten and rechristened as "My Pop the Cop," and released as a single in it's own right in 1998.  Live selections include but are not limited to "Fan Mail," "Nobody But Me," and a brief piss-take of Lou Reed's "Take a Walk on the Wild Side." 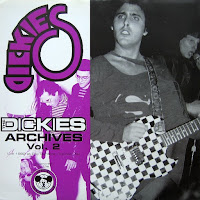 And speaking of covers there are five of them features on Archives Vol. 2, which zeroes in on a live 1982 concert taped for radio at City Gardens in Trenton, NJ.  Dickies renderings of classics like "Communication Breakdown" and "Sounds of Silence" are veritably make a mockery of here.  Therein lies the irony (duh).  Trailblazing original compositions like "Tricia Toyota" and "Manny Moe and Jack" were actually a much more significant draw for someone like myself.  Enjoy.

Archvies 1
01. Out if Sight, Out of Mind (Stukas over Disneyland, alt. take)