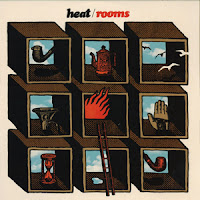 Feel the burn!  Hard to believe another band didn't christen themselves with such a simple but effective moniker before Montreal 's Heat seized the flame for themselves.  The seven song Rooms (apparently expanded from an earlier incarnation) introduces this quartet to the world at large, their reputation abundantly staked on frontman Susil Sharma, whose Dylan-esque spoken/sung drawl is buttressed by some very Strokes-ian sonic maneuvers.  If that suggests an unlikely mishmash so be it, and admittedly the recipe works to varying degrees of efficacy.  The buzzy and bustling "All I Wanna Do" finagles with deliciously punky tempos, "Susisfine" is a rush of sweet guitar harmonics and warm reverb, and on the tremolo-kissed closer, "Wild Eyes" culls all of Heat's finer attributes into something all the more compelling.  And here's the kicker.  Having witnessed the band in a live setting last week, I was floored as to how advanced Heat's melodic acumen was, conveyed in a batch of new songs that supersede just about anything on Rooms.  Translation: the best is by far yet to come, hopefully on Heat's next record which I would logically expect to drop in 2016.  As for the ep in question , get your scorch on at Bandcamp or through their Big Cartel site.  It's burning up iTunes as well.

So weird, I just happened to come across them tonight, on this compilation: http://cjlo1690am.bandcamp.com/album/cjlo-1690am-baked-in-the-oven-vol-3-crispy-chords

Thanks for this blog...It's been helpful for me a few times!