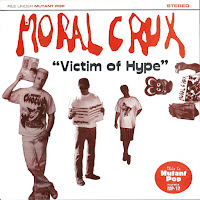 The pride and joy of Ephrata, WA, Moral Crux were always a bit formulaic, but oh what a formula!   Spiking traditional Brit punk with Yankee nuances (often deferring to the Ramones) the James Farris fronted combo doled out swift, mid-tempo slammers, that were tighter than Spandex (which by the way the band probably didn't adorn themselves, but one can never be too certain).  The three catchy-as-all-get-out tunes on this 45 are as representative as anything else in their cannon, which was particularly robust in the Clinton-era.  Surrounding Victim of Hype were a spate of equally consistent full-lengths including but not limited to ...And Nothing but the Truth and the well stocked Greatest Hits CD comp.  Word is that not only is the band alive and kicking, they have a new ep headed your way any day now.  Welcome back!

A. Victim of Hype
B1. Smash Your Face
B2. Firing Squad