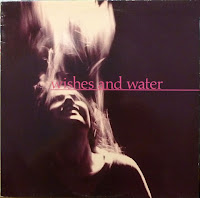 Fountain of Youth Records was a Washington D.C. based imprint that pumped out a slew of releases for hardcore titans Goverment Issue during that band's eighties reign.  Most of FoY's roster was of the punk persuasion, but there were a couple of anomalies as well, Wishes and Water being key among them.  Not much is known about the band, essentially a duo composed of Matt Riedl, formally of Braille Party, and Derrick Hsu, who I believe had a hand in running the FoY label itself.  W/W weren't punk or abrasive in the least, skewing considerably closer to a singer/songwriter setup.  Frankly the bulk of this record is too genteel, even for my tolerant palette.  The jangly-ish "Tears" is probably the most creative notion on the record, and recommendable in and of itself.  A traipse thru Lou Reeds “Perfect Day” fits like a glove, and the brisk Don Mclean cover that concludes this disk is more stirring than several of Wishes' originals.  You can peruse another critique of Wishes and Water here.

Just wanted to say I love reading your blog and look forward to all your posts! Centri Records is a New York based independent record label owned by Rhandy Acosta. It originated as a way for local talent from Queens, NY. Rhoyale’s new single Tonight is now available on Apple Music and Google Play. Add it to your playlist today.

Very pleasant release, totally unknown to me.
Thank you very much for sharing it.

Could you please re-upload this one thanks!