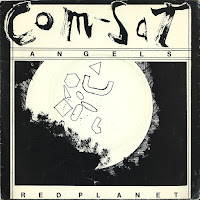 I've long been a fan of the Comsat Angels initial trifecta of superb, melancholic post-punk albums - Waiting for a Miracle, Sleep No More and Fiction, released thru 1980-82.  Ergo I jumped at the chance to purchase a well-matained used copy of their very first record, the three-song Red Planet ep from 1979 released on the UK indie imprint Junta.  I thought I had a pretty good idea of what I was going into, given the date of it's release and the Comsat's reputation that followed immediately thereafter, but unbeknownst to me I had a twist in store.  "Red Planet," wasn't the stuff of gloom or wariness, rather a cheeky and cynical itinerary of what would be unfurled after humans landed on the fourth rock from the Sun, propelled by a quasi-disco rhythm track no less.  It's a quirky little number, as is the organ-laden "I Get Excited."  The concluding "Specimen No. 2" sputters off into even more dissonant terrain, suitable for a soundtrack to a Martian voyage itself.  So there you have it, the C.S. Angels I hardly knew.  The whole thing ripped from my own copy is submitted for your approval below.  I should also mention there's an overhaul and expansion of the band's first six albums coming as early as this November.

Great stuff! Thanks a lot!

Just wanted to say I love reading your blog and look forward to all your posts! Centri Records is a New York based independent record label owned by Rhandy Acosta. It originated as a way for local talent from Queens, NY. Rhoyale’s new single Tonight is now available on Apple Music and Google Play. Add it to your playlist today.