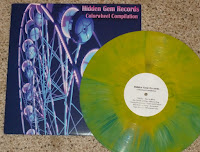 Any fan of twentieth-century rock and pop (especially the type of toothsome treats I present on this very site) know full well that scoping out quality present day talent is akin to an excavation.  It requires motivation, an appreciation of the the trend du jour, and an unyielding sticktoitiveness.  Many of you aging cynics in the audience have long relented the hunt due in no small part to happening upon an abundance of ho-hum "rocks."  I say why plunder for mere stones and pebbles when you could be digging for GEMS!  Conveniently enough, a newish Philadelphia record imprint, Hidden Gem Records has assembled a vinyl compilation, Colorwheel, comprised of nine up and coming acts offering everything from tweaked electronica to combos that recall '80s British indie pop.  Let me tell you about a few of my favorite selections. 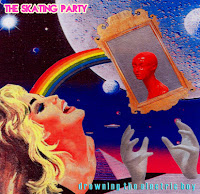 Colorwheel is yours on double-dipped, splattered wax straight from Hidden Gem.  You can preview a few songs for via Soundcloud.
Posted by spavid at 8:48 PM

Spavid - what is the best way to get in touch with you regarding something you posted on your site a few years ago?

Excellent piece, thanks so much Neal!!!!