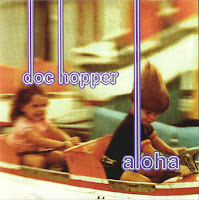 Several years ago I barely mentioned Doc Hopper on these pages, specifically in a feature I did on a split 45 of theirs with the Bollweevils.  I'm surprised it didn't occur to me until now to run something else by them up our proverbial flagpole.  Denizens of the New England corridor (Maine originally, and later Boston from what I understand) D/H were practitioners of the "popcore" thing, conveying themselves as a looser, scrappier variation on what All, Big Drill Car and even early Goo Goo Dolls had so successfully mastered.  Aloha was the first of three riffola-laden full lengths, and in my opinion the most satisfying album they did, home to a host of gems like "Melcher" and "Skyler."  Though it would have been regarded utterly passe by today's standards, a punk band doing classic rock retreads was an acceptable idiosyncrasy in the mid-90s.  The Hopper managed to get away with thrashy renderings of Simon and Garfunkel's "Homeward Bound" and the Go-Go's "Head Over Heels."

Closer to when Aloha was released it was mentioned to me that these fellows had a preceding cassette album in circulation.  Would love to lay my ears on it if any of you can offer some assistance.  If there's any interest I can share a couple of Doc Hopper singles as well.  Their two follow-up albums, Ask Your Mom and Zigs, Yaws & Zags are available as paid downloads on iTunes and Amazon, and CD copies are a bargain at the latter.

Love this album! Picked up a copy of it in a CD swap in the late 90s. I didn't really like the two following albums... but, the live split w/ Weston is fantastic! I'd love to hear the singles you have!!!

always liked doc hopper, but much preferred sinkhole. still one of my fave pop punk bands. chris sang for both, but played guitar in doc hopper and drums in sinkhole.

LP was on Reservior, their 2nd LP was as well. Reservior also put out 2 AMAZING Hellbender LPs.