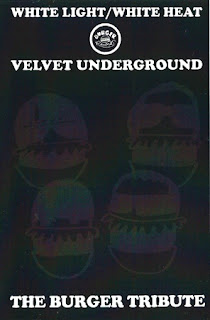 Oh boy.  The rendering of any Velvet Underground song is likely to be wildly hit or a miss (take a guess where Macaulay Culkin resides on this spectrum?) let alone an entire album.  The cassette lovin' Burger Records peeps slung together this lil' thang in late 2013, and for the life of me I'm not sure why they thought a mere 500 copies would be sufficient.  The six revisionists responsible for this tape are all virtual unknowns. so you're forgiven if you plead ignorant to all/any parties involved.

Those of you who've lived with White Light/White Heat, be it for a few years or several decades knows this was the grittiest thing V/U ever put their beloved stamp on, but that facet doesn't always translate over to this bad boy.  Natural Light are the most effective of this tribute's half dozen at conveying the raw, analog aesthetic in roughly the same mold originally cast by Lou Reed and Co.  Memories replicate the pithy, word-for-word dialogue of "The Gift," which frankly never did squat for me in the first place.  "Lady Godiva's Operation" is my favorite WL/WH selection, and Mozes and the Firstborn are as adept as anyone in reinterpreting it, while Curtis Harding infuses "Here She Comes Now" with a distinct Motown bent.  And sadly, Gap Dream thoroughly butcher the dirge-like grandeur of the Velvet’s slow burning “Sister Ray,” bleaching it into one
solid streak of wordless, space-age ambience rendering it unrecognizable, passionless, and for that matter, innocuous.  I call bullshit.  And to think I actually respected these guys before I heard this monstrosity.

If you would prefer to stream this as opposed to absorbing 80 or so megabytes Soundcloud has you covered.  My rip is culled straight from the cassette.