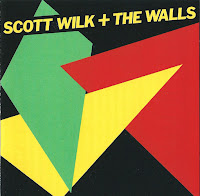 Well, this one was formally the province of a Mystery Monday post from earlier this year, but for no apparent reason I've opted to make it available at large.  When Scott Wilk + The Walls was dropped some 35 years ago, a big fuss was made to the quartet's rather blatant similarities to one Elvis Costello.  Can't argue there I suppose, but Wilk and Co. were also absorbing the then burgeoning American power pop/wave tradewinds.  Furthermore, Wilk didn't quite possess Costello's pithy acumen, but I'll be damned if "Suspicion" and "Shadow-Box Love" didn't share that giant's uncanny vocal aplomb.  The band's one and only record was reissued several years ago on CD for the first time, and appears to be out of print again.  Here's Trouser Press' assessment of the situation.

Encountering the line between artistic influence and stylistic plagiarism, Scott Wilk grabbed a copy of Elvis Costello's Armed Forces and blithely pushed ahead. Parts of his record are uncannily accurate impressions; the cover design and group photo do nothing to reduce the Costello/Attractions allusion. Funny thing, though — the album is really good! If you can ignore its derivative raison d'être, you'll find powerful, well-crafted songs, impressive playing and production and an overriding sense of cohesion. An unexpected but disconcerting thrill.

Best Elvis Costello Armed Forces-era imitation ever! Although Jo Jo Zep and The Falcons gives it a run for the money. Like that outfit, Scott Wilk and The Walls were not simply imitators (just like Mouse And The Traps were not simply Dylan Highway 61 imitators), but I have to admit the ones that sound the most like Elvis and The Attractions (especially the great "Radioactive") are the ones I love the most.

Thanks Bruce. So far as I'm concerned the greatest Costello rip is the Jags "Back of My Hand," which is ironically catchier than anything ol' four eyes ever put his stamp on.

You're right. The Jags is the best rip. Certainly the best song of the bunch.

wow! i have been trying to remember the name of this band/record for years. there used to be a great record store in kansas city years ago called Music Exchange, just wall to wall/floor to ceiling vinyl. one of the guys caught wind of my buying up a bunch of the Any Trouble stuff and handed me this to listen to the next time he saw me. i know i bought it on the spot after the first track, but lost it in a cross country move. with everything going on at that point in my life, this record just slipped through the cracks. i cannot thank you enough for posting this.

I love this record. I met my wife about twelve years ago and the song "Suspicion" was one of my many ohrwurms. She is the only person I have ever met in my life who remembered the song and video.

Thanks so much for this, this is one of those names I'd heard of but never heard the actual music.

I'd also second The Jags as the best EC copyists!

That entire Jags album with "Back of My Hand" is phenomenal.