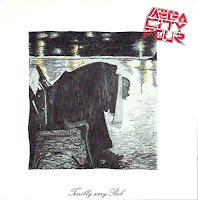 In the 1980s you might say the premise of American punk rock transitioned from the socio/political to something of a more personal nature.  Husker Du, The Descendents, and a bit further along Superchunk, were a handful of key propagators of this trend.  In England, Mega City Four were analogous to this sort of "re-purposing" and they boasted a damn fine catalog to show for it, including five length studio albums and an avalanche of singles.  Terribly Sorry Bob chronicles 45s and eps from the first half of their career (1987-90), leading up to and surrounding MC4's Tranzophobia and Who Cares Wins albums.  Many a deliriously melodic and euphoric tune can be experienced here including the likes of "Clear Blue Sky," "Thanx," and "Miles Apart."  I made their fourth LP, Magic Bullets available here many moons ago, and the record that preceded it, 1992's Sebastopol Road recently underwent a grand de-luxe reissue treatment.  Frontman "Wiz" Darren Brown sadly passed on in 2006 due to an aneurysm.

Hi, could you give a new link, this one is broken. Thanksssss !!!