...and I'll be back on your sofa in a puddle in a couple of weeks. 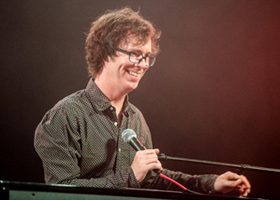 I usually don't get too attached to live bootlegs, but I've been dipping into this one a lot in the past week.  Ben Folds upcoming album, So There (drops September 11th y'all) is a collaboration with yMusic, a pocket-chamber collective based in New York who provide strings, flutes and other high-brow accouterments to Ben's unremittingly dazzling piano pop fare.  And here they are, all six y's, in concert with Ben at Bonnaroo this past June in Manchester, TN.  The set features no less than five songs from So There, that would be just as idiosyncratic if they were performed by Ben by his lonesome.  Irony meets melody, ya dig?  The stuff this guy gets away with, I tell ya... As for the new batch of tunes "Capable of Anything" is quite the rouser, and by the sound of "Phone in Pool" I think I've figured out what the single is going to be.  Naturally, perennial sing-alongs "Not the Same" and "Army" are present (starting to get a tad predictable, Ben).

This is a 320 kbps rip likely taken from streaming video, if not a soundboard tape.  "You Don't Know Me" has a brief glitch, and according to Setlist.fm there's an intro piece played by yMusic that isn't included in this recording.  Rock this, beyotch.  Enjoy.