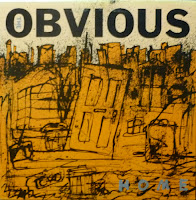 Here's a fairly recent discovery of mine, even if the record itself dates almost three decades ago.  Presumably from Dayton, OH (or thereabouts) The Obvious didn't have to look far for inspiration - specifically to Minneapolis where the Replacements were crankin' away in their prime.  The four youngsters (and I emphasize young based on the back cover photo) responsible for this disk had a penchant for edgy punk 'n roll that I'm sure had them entrenched on left-of-the-dial playlists back in the day.  Pleasantly enough, I'm hearing similarities to the Nils as well.  The title cut is the obvious emphasis piece on this record, appearing in original and censored versions, but I think you'll do just as well, if not better with "Black and White" and "77."  Incidentally I Wanna Records was responsible for the debut Guided By Voices ep Forever Since Breakfast, and they also issued an Obvious full length in 1993.

Came about this by accident too. Home is definitely the best track. Here's the thing, I dig it but I'm also completely annoyed by it at the same time. Can't put my finger on it though...maybe the voice gets under my skin.

I saw The Obvious play live in Columbus in 1988 and was blown away. By that time they were playing DOA-style hardcore. Never got a chance to see them again, but I did find this vinyl record years later. I was disappointed with it at the time, but through no fault of the band. Just disappointed because the style and energy was very different that what I’d seen and heard live. Evidently they were teenagers and evolving rapidly. I wish I’d held onto the record. I would enjoy giving it another spin now.