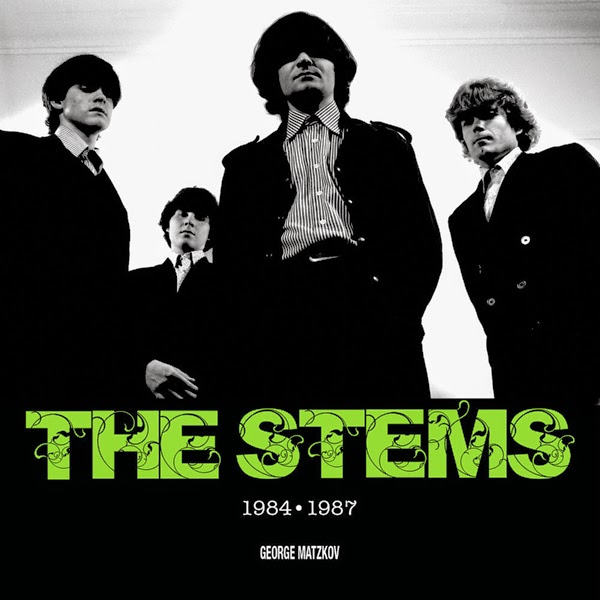 Update 5/1/14:  I've just learned that plenty of copies of the Stems book are still available direct from High Voltage Publishing.

I think this is only the second book review I've offered on Wilfully Obscure, so here goes.  In the '80s, there were more than a few decent garage/psych revivalists to emanate from the land down under.  For my money, two that really stood out were the Lime Spiders and The Stems.  While the Spiders' collective legs seemed to web their way around the world for their proverbial fifteen minutes, the geographic challenge was more daunting for Perth's Stems, whom I don't believe made any inroads in North America save for a cut on the Young Einstein soundtrack (embarrassing times, I know).  Yet the Stems, helmed by demigod-in-the-making Dom Mariani, were responsible for some of the most pristine and quintessentially definitive garage rock songs ever produced from that era, deliberately retro as they may have been.  You see, while the Lime Spiders resided on the trashy, punk side of the continuum, Mariani and Co, were steeped in all things beat, Mersey and mod. 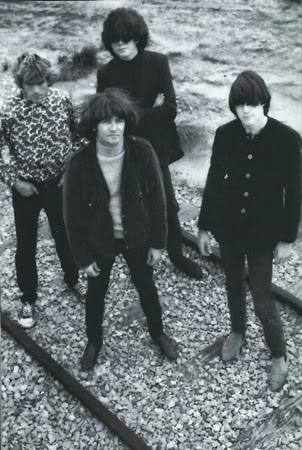 George Matzkov's The Stems1984-87, is a primo keepsake of dozens of professional quality black and white photos of the band snapped at all phases of their tenure.  But why a pictorial anthology of this band, who had a predominantly regional following?  Much like opting to scale Mount Everest, "Because it's there."  In the case of Matzkov, the photos - hundreds of them perhaps, were "there," languishing in shoeboxes, and warranted a larger audience.  1984-87 charts the Stems evolution from mop-topped coiffed rascals to modestly more contemporary looking young-adults by books end.  The Stems farfisa-laden tunes, while impeccably performed, weren't particularly serious or weighty.  To the contrary, the pictures consistently reveal the quartet in an almost unflinchingly austere and distinguished demeanor.  The Dead Milkmen and Oingo Boingo should have been so lucky as to have had Matzkov document their respective trajectories, but I digress.  I'm keeping my fingers crossed for a second pressing of this slim but impressive visual dossier.

Accompanying the book is a CD of live Stems material, culled from multiple concerts, some of which were heavy on covers, and fitting ones at that - The Stones, Count V, Easybeats, Blues Magoos, and even the Plimsouls all get the Stems makeover.  In the link below, I've set you up with two tracks from the disk, plus a pair of Stems classic studio sides, that were anthologized on Citadel Records Buds anthology.  You'll also be treated to one song apiece from Dom Mariani's excellent power pop act The Someloves (who ran concurrently with the Stems) and his even more prolific '90s outfit, DM3.  I've even tossed in a few page spreads of the book to whet your appetite.  The Stems 1984-87 is available from High Voltage books in Australia.

Someloves - Back on Side With You
DM3 - 1x2x Devastated

great post, and some great music! saw that george has some copies up on ebay now......i'd corresponded with Stems-man Dom Mariani for a spell some years ago, and traded a vhs tape of power pop/US stuff for a tape he made me of Stems/SomeLoves/DM3 clips that i NEED to dig out, tho many are up on YT...a class guy, and still rocking.....thanks much!

Tears me in two - one of the few aussie indie standards

Hi mate, is it posible to re-up the CD with this book?
Thanks
Iñigo A.

Any chance of reposting?