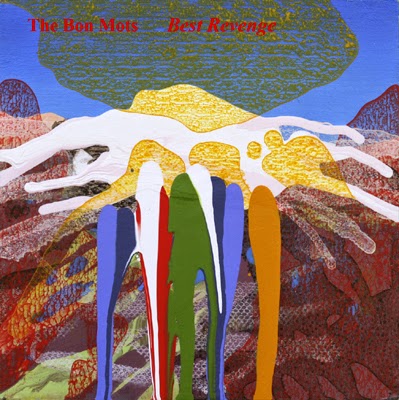 My primary grievance with Chicago's Bon Mots is the sheer infrequency of their albums (only three in the past ten years), but luckily, when they finally get around to laying down some new compositions they make it count.  Best Revenge is their first since 2008's Forty Days and Forty Nights With the Bon Mots, and the warm, lived-in tenor of that sophomore disk manifests itself even more effortlessly here.  You can attribute much of that urbane penchant to the Mot's songwriting duo of Eric Chial and Mike Coy, whose harmonies would be taking on trademark status in a more perfect world.

Boasting an array of rich, alluring hooks couched in a vague power-pop subtext, The Bon Mots suggest what Cotton Mather might have conjured up had they been in the same company as Rhett Miller and Ted Leo.  You know that cliched "sweet spot" we've heard so much about over the ages?  Well, not only does it exist, it's actually satiated on multiple occasions on Best Revenge.  "All The Way (Down)" commences things on an assertive note, in di regueur Bon Mots fashion, not over or underplaying anything one iota.  A bit further in, "Galahad" embraces a sprite, bouncy lilt, while the demonstrably looser "Rome's Burning" toys with half a Stones-y lick or two, maneuvering as smoothly as say, The Figgs.  Better yet, the empathetically sobering "All Your Horses" and "Granted" harbor a semblance of uplift, in the manner that Sloan executed so deftly on Twice Removed.  In a nutshell, the Mots nail it for the third LP in a row.

You can hear (and preferably purchase) all of the aforementioned on Bandcamp, not to mention the Bon Mots brief back catalog.  Best Revenge is available exclusively as a download for the time being, with a physical release to hopefully follow this year.
Posted by spavid at 12:11 PM