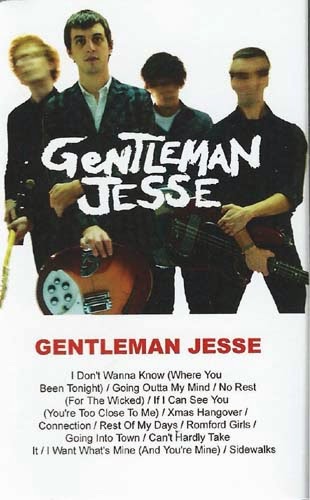 I've resisted dedicating space to Gentleman Jesse on these pages, considering most of his handiwork (and that of his requisite "men") is commercially available...except for this.  As it's title implies. Singles & Rarities is a compilation album, that regrettably, has been offered as an exceedingly limited cassette-only release of 250 copies (mine is #29).  Concocting a whip-smart amalgam of boys-next-door power pop, garage, and three chord punk, GJ was/is part of a relatively recent vanguard that also features in it's ranks the likes of the Marked Men, Jay Reatard (RIP), and King Tuff.  It's music to shred PA's by for sure, but unremittingly melodic at that, conveyed with a steamrolling surge that stays lodged in your cranium long after the music's concluded.

The 45s this collection is partially derived from are noticeably more lo-fi than the band's two proper albums, 2008's Introducing... and '12s Leaving Atlanta.  As such, the rawer context makes for a more visceral experience, even if the formula gets a little samey after awhile.  It would behoove fans of the Exploding Hearts, (and even stretching back to halcyon era Buzzcocks and Undertones) to immerse themselves in this gleeful half-hour-of-power.  With any luck, Singles... will earn the vinyl/digital reissue it should have received in the first place.

Thanks so much for this collection of singles. Gentleman Jesse are easily one of the best in the powerpop revival over the last few years. Can't get enough!

Thanks for this. Have the first single on here, but not rest of the stuff. Any clue where tracks #8 and up come from, as not mentioned on the liner note?

I don't know the original origins of most of these songs. I'm assuming some are unreleased. Check out discogs.com

Ok. The pic you included of the cover had the 'liner note' info for tracks 1-7. Thought perhaps other tracks might be listed on flipside. Nothing about rest of the tracks in Discogs.

Hello. Gentleman Jesse here. Track 8 was recorded at the same time as the 1st lp. It is a cover of a Riff Raff song. 9 - 12 was our demo that Dave Rahn and I recorded trying to recruit people into the band. Thanks for listening!

Thanks for clearing that up GJ!

Hey there, any chance of a reup? Link is dead. Thanks!

A new upload would be nice.