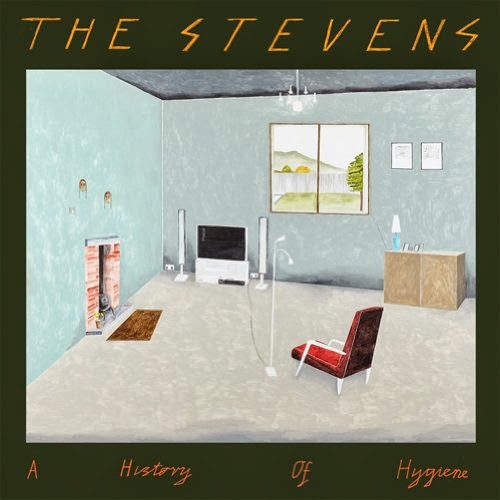 If you've forgotten my review for The Stevens 2012 ep, I more than forgive you, as that probably seems like eons ago, and alas, it didn't exactly make them a household name.  Perhaps that circumstance will be remedied in light of the release of their first full length, A History of Hygiene, a disk that captured my attention even before I cracked the cellophane.  Why?  Well, seeing 24 song titles on the back cover of any album tends to usher me into a state of anticipation.  After all, I loved the tuneful and occasionally dissonant facets of that aforementioned ep - and the possibility of four times that amount this time around had me stoked.

The Melbourne based Stevens tend to operate in two minute parameters.  The same goes for some pretty legendary acts - Bad Religion, They Might be Giants, and Guided By Voices to name three.  The thread tying this disparate trifecta is that each one had a "formula."  The Stevens "formula," quite frankly, is a non-formula, and by the time ...Hygiene reaches it's conclusion, it kinda makes you wish they had adopted one.  In a nutshell, you can loosely describe the Stevens as mid-fi, bedroom pop.  To their credit they're above average at their craft, but when you pitch this many darts at the board, quite a few aren't going to meet the bulls-eye, and that's exactly the scenario here.

One throw that's precisely on the mark is "Challenger," an excellent fuzz-pop nugget that splits the difference between The Soft Boys and vintage Cleaners From Venus.  "From Puberty to Success" agilely evokes some of Pavement's persuasive slack attack, while "Lost and Found" and "Turpins Falls" strike a buoyant and bouncy tenor with rock solid hooks.  Hygiene offers even more keepers than that, but elsewhere the going gets a lot less memorable, with several tracks resembling random fragments more than full-fledged compositions.   The Stevens intermittent aimlessness is either going to charm or dissuade you, and my experience has entailed a little of both.  Word on the streets is that album two is in the works.  Despite faltering on occasion here, their dedication and potential still has me pulling for them.

A History of Hygiene can be previewed and purchased on Bandcamp.  CD hard copies are available from Amazon and direct from Chapter Music.
Posted by spavid at 4:53 PM